Back on the 12th I ordered three marriage certificates for my genealogical research. Well, even though it has only be just under two weeks, it has felt like ages! and they arrived this morning - horray!

The certificates do say exactly what I thought they would and confirm that I was on the right tracks. 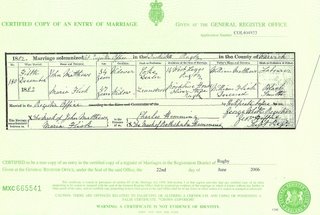 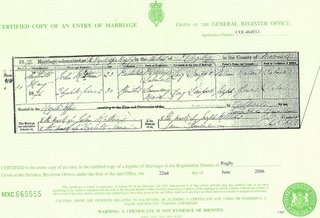 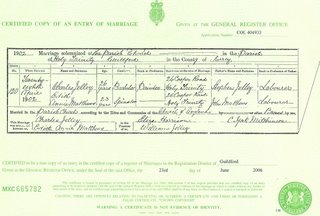 The marriage of Edith Matthews to Charles Jelley is crucial, not just to my research but also my sanity! I've been looking for this marriage or to establish what happened to Edith for 20 years. Edith was actually my great great aunt. We have a couple of photos of Edith, several with children and one of her wearing some kind of military or nursing overcoat. She would have been too old to have been nursing in the First World War, but could have been involved in The Boer War. Either way, she appears on the 1901 Census for Merrow Guildford Surrey and marries in 1902. So if you do connect to Edith, please, please drop me an email!
Posted by Julie Goucher at 11:32 am

Email ThisBlogThis!Share to TwitterShare to FacebookShare to Pinterest
Labels: genealogy