Last week I heard once again from a contact in Canada with whom I share a distant connection, through the KING & EASTWICK lines of my family.


The KING daughters, there were seven of them are alike to the daughters of Mr & Mr Bennett in Jane Austin novel. All the daughters and their brother had a connection to India & the East India Company. More on that side of the family later.


The contact wrote that she had a picture of a painting that depicted three of the sisters. The painting was painted by the artist Thompson and was painted in 1795. The painting is mentioned in two books that connect to the family, An Honourable Company by Margaret Bellaisis and A Master Mariner by Captain R. W. Eastwick and has a lovely romantic story attached to it.


Thompson took a fancy to the younger of the sisters in the painting - Lucy King and proposed marriage. When Lucy declined he refused the finish the painting and retained it. Twenty five years later Lucy who by then was known as Mrs Eastwick was walking through London and noticed Thompson, she asked her son to go after him and when he saw who it was asked Lucy and her son to accompany him back to his home where he revealed the painting which had he said been completed from memory. Thompson then gave the painting to Lucy. The painting is in the hands of the family, sadly not this part of the family!


But isn't the painting a beauty? 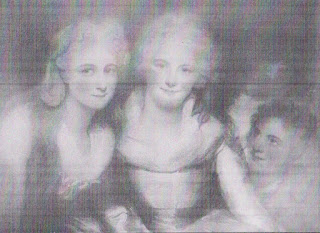 Lucy Eastwick nee King is the lady on the far right of the painting. As I said the painting was done in 1795, and for me to now see a copy of it is simply wonderful. Thanks to my contact PP for sharing this with me.
Posted by Julie Goucher at 6:26 pm