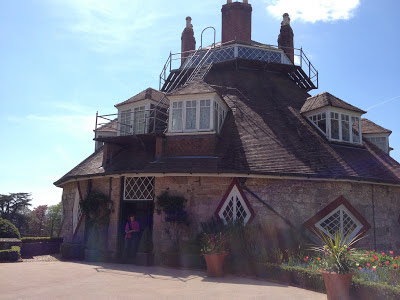 Over the bank holiday weekend, we visited the National Trust house of A La Ronde, a delightful 16 sided house built in 1796 for two spinster cousins, Jane and Mary Parminter.

According to my journal, we last visited on 11th June 2000, although I do not remember much of the visit apart from the room of shells which is located on the very top level of the house and is currently closed off to visitors because of damage to the shell walls, which is in need of repair.

The Cousins, Mary and Jane Parminter had the house built in 1796 after they completed their 10 year Grand Tour of Europe. The shape of the house enabled the ladies to move through the house as the daylight and sun moved. They had an amazing view over the Exe estuary.

Much of the house contains artifacts from their tour, along with picture and early photographs of relatives and  artifacts given to them as gifts by other family members. The Cousins lived on the ground floor of the house only, the middle floor was used mainly for storage and then they used the top room, completely decorated with shells.

Here are various photographs from inside the house.

The stairs were very small to navigate, but they arrived into what was originally a storage room. Along the same corridor was a bathroom. 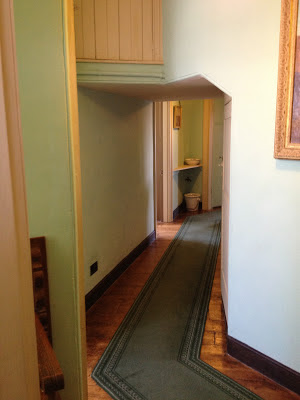 From this corridor there are stairs which gives access to the room of shells. Sadly, access is prohibited due to the damage to the shells, but there is a restoration project underway. These two photos hopefully give an idea of the room of shells.
Back downstairs, the rooms are accessed from a central, circular hall, again with views, glimpses to the shell gallery. 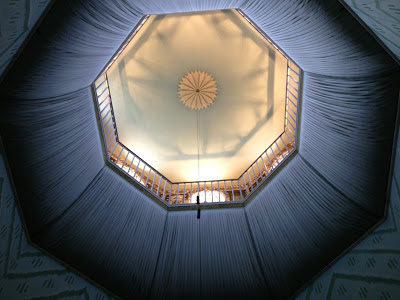 There was a dining room, a pantry and a drawing room.

As the shell gallery is not available to visitors, the National Trust have videoed the room. I managed to take a few photographs of the video. 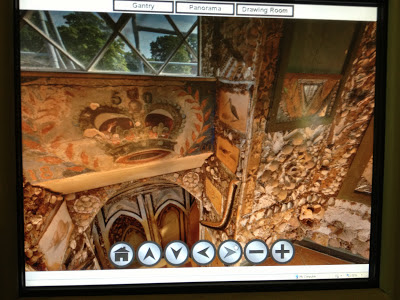 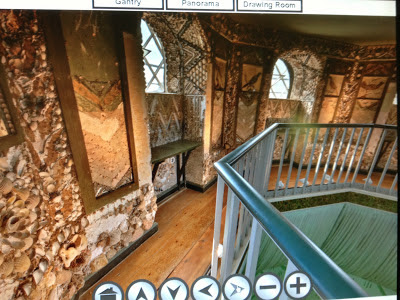 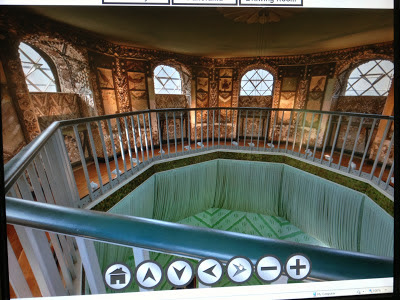 The kitchen is downstairs and has been utilised to enable the customary tea room to function.

The house passed through the family, only to the unmarried female relatives. At some point the house was passed to a husband of a married female relative who put the house on the market. By coincidence, two spinster sisters related to the Parminter cousins became aware of that and purchased the house and it remained in family hands until it was placed in the hands of the National Trust.

The house displays how women who were financially stable occupied their time during this period. The Cousins were talented and many of their drawings and paintings hang through the house.

Miss Jane Parminter was born in Lisbon in 1750 the daughter of Richard Parminter of Barnstable. In 1773 Jane became guardian to her cousin Mary and on the death of Jane's younger sister the two women decided to make their home in Devon where they had A La Ronde built.  Soon after they moved into the house the cousins bought some land where they had erected a chapel, almshouse and school.

Pop over to Grave Encounters to read about the Chapel, know as the Point in View Chapel
Posted by Julie Goucher at 11:18 am