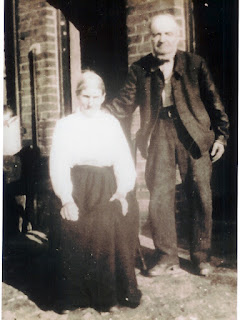 Caroline Ellis, shown here on the left, was born in Puttenham Surrey in 1844 the daughter of George Ellis, a former military man and Prudence Budd. The Budd family had been established in the parish of Puttenham since 1723, and lack of surviving records has prevented a firm conclusion of the Budd's originally living in nearby Shackleford. Together, Caroline and Henry raised a family of ten children, all born in Puttenham. Caroline and Henry spent 65 years together, with Henry passing away in 1929 and Caroline in 1935.

Henry Harris was born in Headley Hampshire in 1844 to George Harris and Harriet EARLE. Henry was one of not only 10 children born to George and Harriet, but also one of set of triplets. George and Harriet had previously had twin boys, George and John in 1837, John though, died aged 1 year. In 1844 when Henry was born, his mother also gave birth to Emma and Thomas. Henry and Emma both lived into adulthood, although Emma died in her late 30s and sadly, Thomas died aged just one year. Henry lived until 1929 when he passed away aged 86 years. Were multiple, multiple births common in the 19th Century? Henry worked as a labourer and around 1864 married Caroline Ellis in Puttenham Surrey.

This photograph, taken by their Grand daughter, my Great Aunt on the occasion of their 60th Wedding Anniversary.

It was the tale relayed to me by the same Great Aunt who took this photograph that has provided the minuscule details of my Monday Mystery.

My Aunt said that her "Granddad Henry had been "swizzled" out of some land on the Common (Puttenham or Headley) by his niece Jane Harris. He even went to London to try and get it back, but he didn't manage it"

I have always been curious over this matter and not long after I started researching my ancestry I met a family member, connected to the Harris & Burrows line. There had certainly been a feud, although if this was the cause of it I can not say.

In the meantime, the local archives for Headley have transcribed the records and notebooks left by the vicar of the parish. Within those notebooks is the following -

"p.281 Letter:4 Field Court, Gray’s Inn, W.C.,
Telephone 2525
Telegraphic Address: “HUNTSMOOR, LONDON”
20 April 1888
Dear Sir
You may have heard from Mr WRIGHT that we have been obliged after all to abandon the claim by Daniel HARRIS to the fund in the Court of Chancery.
We find that Letters of Administration were taken out to the missing Legatee’s Estate many years ago by Henry HARRIS who described himself as the cousin of the missing legatee. If this were correct that is to say, if the missing legatee’s father was legitimate, David HARRIS’ share would be a few pounds only and to prove that it is incorrect requires an action in the Probate Court which would exhaust the whole of the fund.
We beg to thank you for the assistance you have so kindly given us in the matter.
We are, Dear Sir,
Yours faithfully,
R S Sayle & Son & Humphreys
To: The Rev W H Laverty
Headley Rectory
Liphook
Hants."

This does not appear to be the same story as the one my late Aunt said, so is this somthing different?

The names of David and Daniel Harris do appear within my family, both brothers of Henry's father. There was also a Daniel Harris who married a Charlotte Bridger who connects with my late Grandmother's family.

Such a lot of mystery to unravel and that is before I even start on the Harris families!

This map does given and idea of the complexities of the geography of this area, which explains the various families marrying into other families that already sit within my genealogy. Really, it is no wonder I have a genealogical headache hangover!

Posted by Julie Goucher at 4:00 am