Earlier in the week I spoke of a visit to the Royal Albert Memorial Museum in Exeter. You can read my post HERE & see some photographs of the various plaques at Grave Encounters. 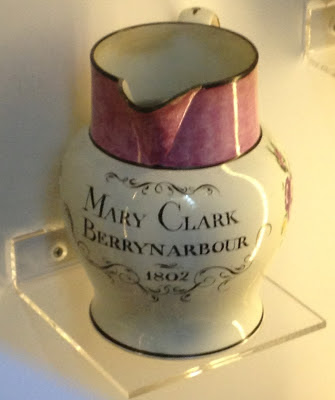 The details on the information card revealed that it was named for Mary Clark of Berrynarbour and shows the date of 1802.

The pearlware jug was made at the Swansea Pottery in South Wales. This type of pottery became popular in the late 1700s as a cheap and hard wearing alternative to porcelain. Much of the white clay was extracted from the Teign Valley in South Devon, actually not too far from where I live. It was mixed with flint to produce the required colour and pearlware was an improved lighter colour

Email ThisBlogThis!Share to TwitterShare to FacebookShare to Pinterest
Labels: antiques and collectibles, Geneabloggers