Happy 75th Anniversary to my Grandparents 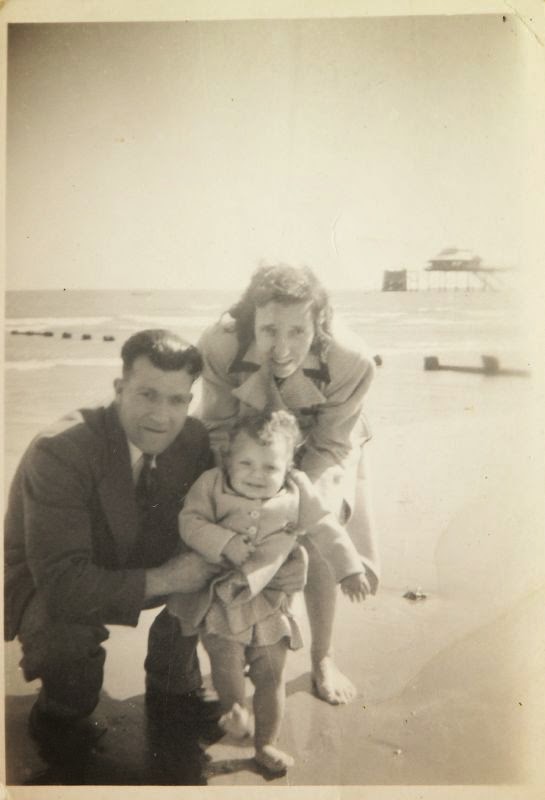 Today marks the 75th wedding anniversary of my late Grandparents.

They married at Guildford Registry Office and the witnesses were friends. The marriage certificate does not indicate that any family were present, but I know they were.

At the time of their marriage my Grandmother, Lilian Edith Matthews was 26 years old, both her parents were deceased and she was living with her sister and brother in law in Guildford. My Grandmother also had another sister and six brothers. At least one of the brothers was at the wedding because he was married to my Grandfather's sister.

My Grandfather was 31 years old and both of his parents were alive and as were his eight siblings. I know that at least two sisters were at the wedding, Marge who was married to my Gran's brother and Dorothy who was my Grandfather's younger sister. I suspect others were there, because my Grandmother naturaly gravetated towards my Grandfather's family.

The photograph shown here was taken at Shoeburyness in Essex when my Grandparents were visiting my Grandfather's older sister Gladys. This dates to about 1949 and is one of the earliest photographs of my Grandparents with my Mum who was born in 1947. There were no photographs of the wedding. Not surprising as my Grandmother hated having her photo taken. Of course England had been at war two months by the time of their happy and special day.

My Grandfather died in July 1974 just four months before they were to celebrate their 35th wedding anniversary. How sad my Grandmother must have been, for them to not have reached their special milestone. I know she missed him for the rest of her life; she lived another 21 years passing away in April 1995.

Posted by Julie Goucher at 6:55 pm