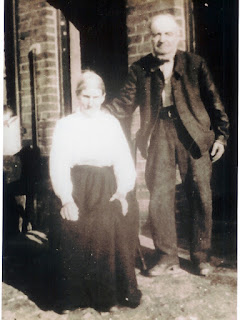 When the majority of our ancestors married did they do so for love? Divorce was time consuming and expensive and restricted to those who could afford it. We all like to think that our ancestors married for love.Think all the hardships they endured to raise their families, those families who, if they had not existed, then neither would we.
I was given this picture by one of my Grandfather's first cousin's and I recall showing it to my Great Aunt. Her sight wasn't particularly good, but I wondered if she had ever seen the photo, so I asked her.
I was surprised and delighted with the answer, which was, I don't just recall the photograph she said, I took the photograph she said really proudly. Well that was two of us who were proud.
The photograph is of my Maternal Great Great Grandparents, Henry Harris (1843 - 1929) and Caroline Harris nee Ellis (1844 -1935). The couple had married on 3rd December 1864 at Puttenham Surrey. This photograph was taken on the occasion of their 60th Wedding Anniversary in 1924 and was taken at Manor Farm at Wanborough Surrey.
I am delighted that:
Henry and Caroline raised a family of 10 children born between 1864 and 1885, their eldest child, born just a few weeks after their wedding.
Was this true love? I do hope so.
Word count 273
Posted by Julie Goucher at 1:33 pm