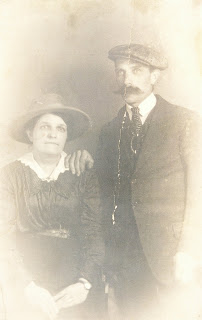 As I said in an earlier post, my Grandmother's parents died in 1931 and 1937 respectively. This is a photograph of them; John Matthews and Mary Elizabeth Elstone.
John Matthews was born in Rugby Warwickshire in 1875 the only son of John Matthews and Elizabeth Spencer. Elizabeth died in 1877 following the birth of the their youngest daughter Edith Annie leaving father John to care for son John, and daughters Edith and Mary Anne.
John Matthews Senior, was born in 1848 in the parish of Long Lawford near . He was recorded as a coke dealer and had a business address near the gas works in . Following the death of , whom he married in 1871 he remarried to Maria Flick who is recorded in the census and on her marriage records as a widow, yet no evidence has been able to prove this fact. She even gives her father as William Flick deceased on her marriage certificate. My Grandmother knew fairly little about her father's family history. She certainly knew about the sister Edith and passed along to me a few photos. She always maintained that her parents would visit Rugby each year to visit family and that her father attended . I need to further chase the school records but so far no record has been found to confirm this. Whatever happened in , John and his family moved to Guildford Surrey and resided in the parish of Merrow, having moved there after 1882. We know this from the marriage certificate of John to Maria. Nothing was known of John’s sister Mary Anne, but that is another story.