Beyond the Internet Week 13: Lest we Forget: War Memorials

I always feel a sense of sadness when I come across a War Memorial. As I stand and reflect upon the names that appear on the Memorial, I have an acute sense of awareness that the names reflect not just a sacrifice made by the named individual, but beyond that there is a deep sense of loss to the families left behind. In some cases families suffered more than one loss. How do you recover from that?

Following the First World War there was an obvious increase in the amount of War Memorials. Each Memorial reflecting a generation lost.  The photograph below is from the Parish of Enstone in Oxfordshire. 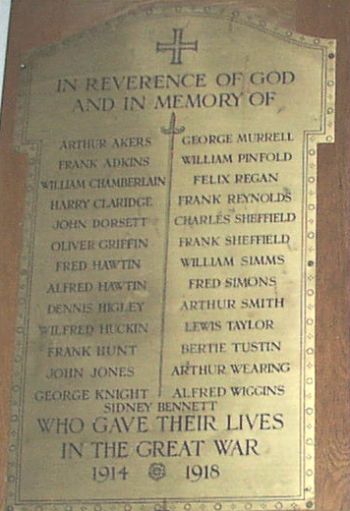 As you can see there are two families that have multiple entries, these are the Hawtin & Sheffield families.
I have a slight interest in the Sheffield family. My Great Grandmother's sister, Mabel Harris married into the Sheffield family. They resided in London in the docks areas as that is where they worked. They raised a family of three daughters and one son. One of the daughters married a cousin so she was a Sheffield all of her life, which was a long one. She, like many of the girls from this part of the family lived well into their 90s.
Posted by Julie Goucher at 11:52 am

Email ThisBlogThis!Share to TwitterShare to FacebookShare to Pinterest
Labels: Beyond the Internet, Harris