Family History Through The Alphabet Challenge: B is for..... 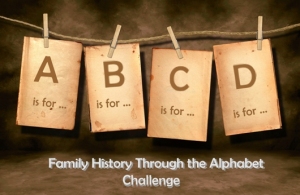 On the back of the A-Z April Challenge, the lovely folk at Gould Genealogy devised another challenge - Family History Through the Alphabet Challenge. Each week, we work through the letters of the alphabet sharing perhaps an elusive ancestor, a favourite or particular ancestor, or perhaps a heirloom.

B is for Budd

As I trawled through the Parish Records seeking and building the family tree from my Great Grandmother and beyond I came across the connection to the surname of BUDD. I had quickly established that my Great Great Grandmother Caroline Ellis was the daughter of George Ellis and his wife Prudence Budd.

This was quite early on in my research, so around the late 1980s. I turned up to my Great Aunt's for our fortnightly catch up. My Great Aunt was by this time in a wheelchair, with very limited sight, but still had the memory of an elephant and a razor sharp mind. As was our custom I was directed to make the tea, using the best cups and saucers and cut some cake. As I type this I can hear her in my mind, telling me to hurry up and had I bought my notebook?

Tray filled and carried into her lounge, I would poor the tea and make sure Aunt to hold her plate of cake, usually a Maderia. I would say that I had my note book and off she would go. Her mind cast back to a generation or two prior and I would see that I was to her no longer in the room, she was back to a young girl again and as she remembered past times I would furiously write the details down.

I recall, sitting the tray down and instead of staying I had my notebook I said I had located the marriage of Caroline's parents. Before I had chance to say anything more, Aunt said, oh yes, Carrie's mother was Prudence Budd you know. My big hype of information had vanished in a flash!

Prudence Budd had been born in Puttenham in 1817 to Richard Budd and Sarah Kemp. Prudence married in 1834 in Puttenham to George Ellis. Together they raised 8 children before Prudence died in 1855, 45 years before my Aunt was born.

It is only with looking back now, as I realise that my Great Aunt herself died nearly 20 years ago that I find myself realising that Aunt knew of her Great Grandmother through a living memory presumably shared through Caroline. The Budd's were a well documented family. I can trace the family back to 1724 in the village of Puttenham before the trail turns cooler.

The Budd's were potentially from neighbouring village of Shackleford and I have managed to trace a Henry Budd referenced in the parish. I can not say with 100% certainty that Henry came from Shackleford, but can say with probability that he did. More research is needed.

In my mind I can be in my Aunt's lounge and asking her the question of do you know where the Budd's came from?,  and I think that I an possibly hear her faint response.....
Posted by Julie Goucher at 3:33 pm

Email ThisBlogThis!Share to TwitterShare to FacebookShare to Pinterest
Labels: Family History Through The Alphabet Challenge