Last week we looked at society websites, blogs and we briefly touched on social media. Today we are going to look at Branding and logos.

Have a look at this picture. It is simply a collage of images created by me and were chosen because they will hopefully mean something to you, the readers of this post. I have not been compensated by any organisation, the images used are done so as an illustration point.

So, do you recognise any of them? Some are UK or Australian specific, some are from the USA and one is from South Africa. There are a few that are global and represent social media.

The point is that they are a representation of the individual companies and are worth millions. I worked for an organisation who merged with one of the logos represented here. The deal made someone a very rich individual, and was a really brilliant (and virtually unheard of) strategic move.

Each of the logo's is a statement of identity and taking the steps further we look at branding. The colours used in those logos are the corporate colours. Whatever the logo is, whatever the colours chosen they need to be eye catching, something that jumps out at you the moment you see them. Using 15 shades of the same colour does not necessarily equate to eye catching!

Within the family history and genealogical arena you might think the logo is typically going to involve trees, but does it? Here is an example of the logos from a few societies that I belong to. 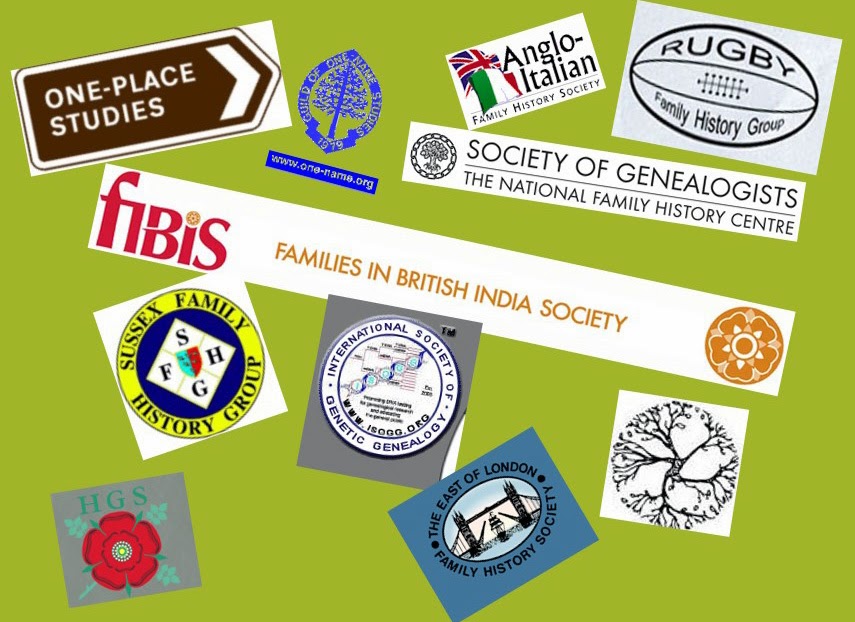 Do you recognise any? Are you curious about any of the logo's? Which ones do you find eye catching and why?

The majority of these organisations have been in existence for some years. I have been involved in two of these Societies since their beginnings and hold the membership number of 1 for one of them. The logo in probably all of these organisations was created at the beginning, with probably little thought that it would be around many years later. That is not a criticism, simply that at the beginning of an organisation's journey, there is not time to think about the longevity of the logo. At least three of these societies in the last year have celebrated their 40th birthday.

The logo is typically going to reflect in some way the area or speciality that they represent. That is a fairly typical way of thinking. Can they be changed in the future? Yes they can, if it is deemed necessary. Changing a logo is not as difficult as it sounds, and I worked for a company that went through a re-brand and merger within four years. I have some former colleagues still getting over the shock, years after the event!

It is not just organisations that have branding and image to consider. We all do. The name of this blog for example is my brand. I also have an unusual surname, so I often use that too. It is interchangeable and whilst that might not be ideal, that is the way I have always been known. There are various other people on-line that have an logo or image that represents them, but that is a topic for another day!
Posted by Julie Goucher at 11:57 pm