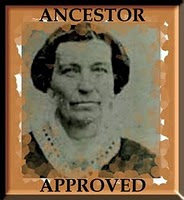 Thank you to Allin at Australian Genealogy Journal (ausgenjourneys) for nominating the Anglers Rest blog for the Ancestor Approved Award. I do feel really honoured to have received the nomination.
This Award was created by Leslie Ann Ballou at Ancestors Live Here in 2010, who asks two things of those who receive it:
Ten enlightening, humbling or surprising aspects of my family history research:

The second photo is of his mother who is wearing, with pride and deep sadness the loss of her only son, a pendant bearing the photo on the left. This is a really humbling fact of my family history and we have plans to head to France and pay our respects to William James.

Ten other researchers whose Blogs are making their ancestors proud
There are so many humbling and surprising things that we find along the way when researching the lives of our ancestors. Likewise there are so many fascinating blogs and websites that document other families. Choosing ten was quite a challenge!
Posted by Julie Goucher at 7:29 pm