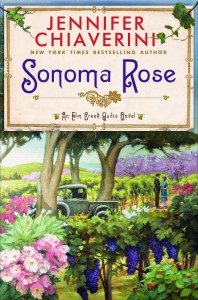 From New York Times bestselling author Jennifer Chiaverini, a powerful and dramatic Prohibition-era story that follows the fortunes of Rosa Diaz Barclay, a woman who plunges into the unknown for the safety of her children and the love of a good but flawed man.
As the nation grapples with the strictures of Prohibition, Rosa Barclay lives on a Southern California rye farm with her volatile husband, John, who has lately found another source of income far outside the federal purview.
Mother to eight children, Rosa mourns the loss of four who succumbed to the mysterious wasting disease that is now afflicting young Ana and Miguel. Two daughters born of another father are in perfect health. When an act of violence shatters Rosa’s resolve to maintain her increasingly dangerous existence, she flees with the children and her precious heirloom quilts to the mesa where she last saw her beloved mother alive.
As a flash flood traps them in a treacherous canyon, only one man is brave—or foolhardy—enough to come to their rescue: Lars Jorgenson, Rosa’s first love and the father of her healthy daughters. Together they escape to Berkeley, where a leading specialist offers their only hope of saving Ana and Miguel. Here in northern California, they create new identities to protect themselves from Rosa’s vengeful husband, the police who seek her for questioning, and the gangsters Lars reported to Prohibition agents—officers representing a department often as corrupt as the Mob itself. Ever mindful that his youthful alcoholism provoked Rosa to spurn him, Lars nevertheless supports Rosa’s daring plan to stake their futures on a struggling Sonoma Valley vineyard—despite the recent hardships of local winemakers whose honest labors at viticulture have, through no fault of their own, become illegal. 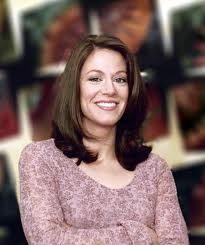 JENNIFER CHIAVERINI is the author of the New York Times bestselling Elm Creek Quilt series, as well as five collections of quilt projects inspired by the novels.  A graduate of the University of Notre Dame and the University of Chicago, she lives with her husband and sons in Madison, Wisconsin.
Connect with Jennifer at her website, Elm Creek Quilts Online.

I have been a fan of the Elm Creek Series since a fellow book reader alerted me to the series about 7 years ago. So, as soon as I saw this book was available to review I enthusiastically raised my hand and awaited for the book to cross the Atlantic.

Initially, I could not see how this fitted with the theme of Elm Creek, but a few pages in and I recognised a name from an earlier book. This latest addition to the series is set as Prohibition rages; this book delves deeper than just a great storyline. It brings to life events and hardships that would have happened. The struggle for survival by those who lives were turned upset down by the impact of Prohibition.

It is also the story of the relationships.

Firstly between the main character Rosa and her brute and bully of a husband. I could feel Rosa's fear, not just for herself but for her children and the circumstances that she finds herself in and how she copes with those circumstances. It is also the story of her husband John, who struggles and fails with acceptance that he is second best for Rosa's love. John has tried to isolate Rosa. He tried hard to restrict her relationship with her parents and when her mother dies, Rosa is devastated. Later Rose contemplates if John is responsible.

The second relationship is between Rosa and her first love, Lars, who is the father of two of four children. The characters are bought to life as we delve within the pages and it is very easy to get caught up with their lives. To feel their anguish, fear, worry, despair and love.

Rosa should have left her husband long ago. The final straw is that he returns and sees her with a female friend. He is insistent that Lars is hiding and goes looking for him. Before he leaves he severely beats Rosa and hurts her friend. The friend drives off to warn Lars and Rosa gathers her children and some basic belongings and leaves. Just before she leaves one of her daughters tells her mother that there is something hidden in the barn. A quick explore and Rosa discovers that there is a stash of money hidden in the barn. Rosa takes some of the cash and subsequently takes the strong box with the deeds for the farm so that John can not sell it from under her. I applauded her quick thinking.

Rosa takes her children and hides in a local cave; wrapping the children for warmth in the heirloom quilts made by her mother. Lars arrives and rescues her and the children, and they are fearful that John will catch up with them. John does not; he is arrested for his part in a bootlegging organisation.

Rosa and Lars do get away. They take the children and Rosa to a local hospital. Although Rosa has four children, she has also had four children who have passed away. She is desperate to ensure that that two of her children, who are poorly are treated and to establish what is wrong with them.

Rosa and Lars with the children have a new start, although it is not without it's problems and worries, but I do believe that they are as happy as they deserve to be. Perhaps the lives of Rosa and Lars will feature in a future book?

This was another fabulous book in the Elm Creek series. The characters are rich in description and emotion, which is a theme carried across the entire series. The storyline was interesting and it is clear to see that the author has done lots of research to explore the wider issues around Prohibition and the medical issues involving the children. I thoroughly enjoyed the book and look forward to reading the next instalment in the series.

Disclaimer - I received a copy of this book from the publisher. I was not paid for my review and the review is my genuine opinion of the book.