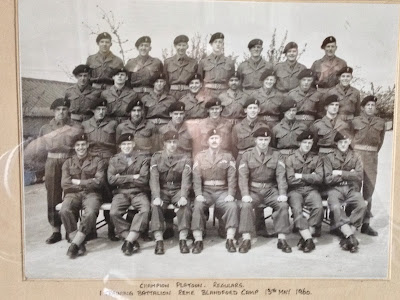 Today's picture is staying with my late father in-law.

Yesterday we saw his recognition for taking part in the Arctic Convoys during the second world war. We know from his medals that he was in Palestine in 1949.

By 1960 he was a sergeant in British Army. The first picture here gives us the date. There is no date on the second photograph. 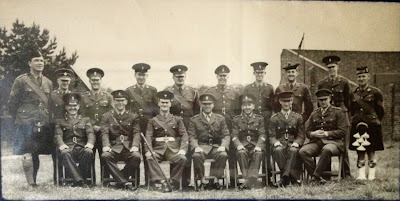 These are actually hanging in my mother in-laws hall and therefore I can not tell if there is any details on the reverse of the photograph.

There would have been hysterics had I suggested we look at the back!

We can date his army dates to at least two years earlier, 1958 because we have this photograph My father in-law on his BSA motorcycle, when he was stationed at Blandford Camp in Dorset in June 1958. He bought the motorcycle for £250.00.


By the time my father in-law marries my mother in-law in 1971 he has left the army. We have no idea of his service record for the army and the Ministry of Defense have confirmed that he will have two separate numbers, one for his navy service and one for the army service and the two records never join.

As I unravel his military service I shall share the information. One day next week I shall explain how to call (and pay for) a request for second world war military records.
Posted by Julie Goucher at 4:19 pm