There was something about the prompt photograph that reminded me of a photograph of my Grandfather's Uncle.

In this photograph, Walter Butcher is standing in the fields at Wanborough with another labourer tending to the land. 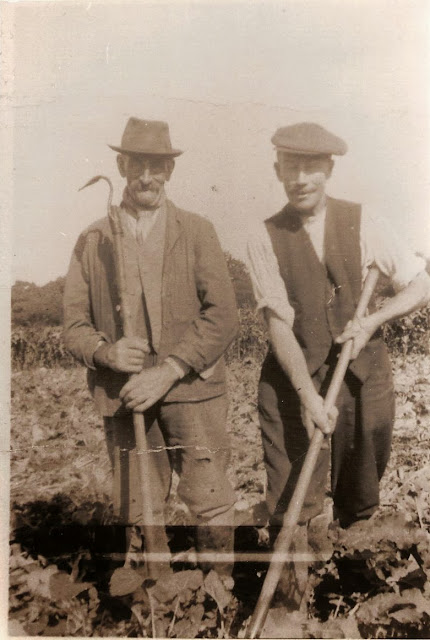 Walter Butcher was born in 1874 in Wonersh Surrey and was the seventh child of a family of eight. My Great Grandfather, Charles Butcher was older having been born in 1869. Both Walter and Charles moved to Wanborough. Firstly Charles having met my Great Grandmother who was from Puttenham moved across the country roads to live in the area of his wife's family. He was later followed by Walter.

My late Great Aunt recalled Walter and from my notebook of 1989 she said "Walter was a mean spirited and weak man and nothing like Dad. (Charles) He had a tendency to follow and copy Dad, which frustrated and annoyed him"

I had heard this before from my another Aunt, and with that information I formed an opinion of Walter, and perhaps that was unfair; that was until I found this reference in the local paper.

At the Camberley Police Court on Thursday, John Knight of Cobbetts Hill Farm was summoned for permitting a horse to be cruelly ill treated on 24th May. A lad in the defendants employ said that when harrowing grass seed, the horse fell into a hole, where it laid until the knacker came to take it away the following day. Walter Butcher, carter, father of the last witness, said he killed the horse after it had been seen by a Veterinary Surgeon. The horse had fallen down at work two or three times.

Inspector Jones R.S.P.C.A said he saw the horse lying in the field. It was in a very poor condition, very thin and very old. It had not got one sound tooth. The horse fell on the morning of 24th May, and it was killed on the following evening. It was too weak to get up. Mr Carter, Veterinary Surgeon, Aldershot, said he thought the horse was between 25 and 30 years old. He advised it being destroyed.

Lily Strickland employed at Cobbetts Hill Farm, said the horse had been regularly fed, but would not fatten. The Chairman, (Mr H J B Hollings) said the Bench considered the case an exceeding bad one, and defendant would be fined £5 including costs.

Walter Butcher a witness on the last case was summoned for ill treating a horse on 24th May, and James Knight was summoned for permitting such cruelty. Inspector Jones said Butcher was driving a pair of horses attached to a large roller. One of the horses had a large sore on the off shoulder, and was quite unfit for work. Knight was fined £2 and Butcher 5/-, the Chairman stating that no doubt he felt that if he refused to take the horses out he might lose his place."

From further research and numerous conversations with now deceased members of my family I am going to build a life profile of Walter. He married and the numerous complexities of that union has really meant that up until now I have not wanted to examine this part of the family further.

Taking part in Sepia Saturday, albeit, rather late in the week!
Posted by Julie Goucher at 9:16 am