When the weather is nice, clear and bright, it is possible to see the coastline of Guernsey. Suitably inspired with decided rather late the night before to do a trip across to Guernsey if the weather was OK. The last thing we wanted was a rough sailing!

After a hearty breakfast, and ensuring we had packed our day bag, not just with sunscreen as the sun was out and it was blowy, but with waterproof jackets we headed off to Elizabeth Pier to catch the ferry which left at 11.15. The ferry service operated by Condor is a swish affair, ping-ponging  its way across from Weymouth to Jersey via Guernsey several times a day. We left late, due to some cargo, and cars being awkward to load and set off for the hour crossing to Guernsey. 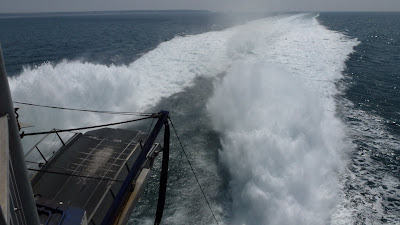 We docked and eventually foot passengers could disembark. We had arrived to a sunny & slightly blowy Guernsey. We picked up the Welcome to Guernsey pack as we arrived into the port and then walked the short distance into town. We found a nice spot to have an early lunch and plan the days events. The one thing with deciding to go at last minute was that we had nothing particularly planned and therefore could get a rough feel for the bit of the island that we had arrived in. In fairness, we will go back and spend a few days there. During lunch we decided to wander around the streets, look in the shops and simply enjoy what was a leisurely day. 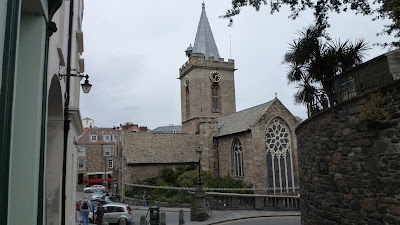 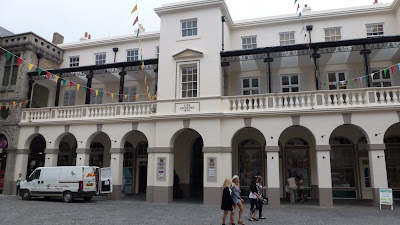 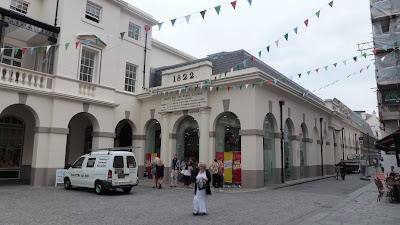 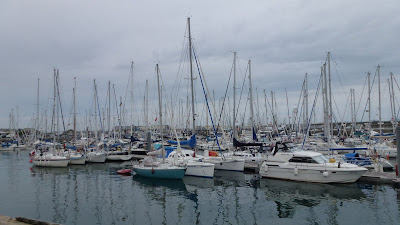 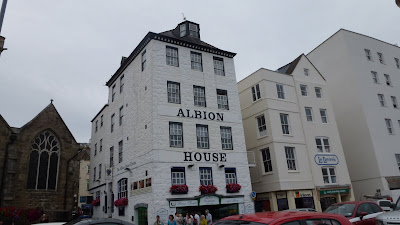 After lunch, the war sun had gone in and been replaced with a rather grey looking sky. The rain did hold off until about 4.30pm when we donned our jackets, it was not heavy rain, but the drizzle type which always seems to get you soaked! We had booked for the last ferry from Guernsey which left for Jersey at 19.10 and would arrive back at Jersey an hour later, which left time for a quick walk back to the hotel, a shower and change before a late dinner. 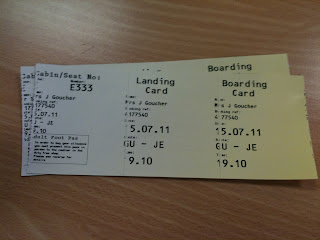 But, things were not meant to be. The ferry was going to be an hour late arriving and then obviously would not arrive back to Jersey until after 9pm. By this time the rain was certainly coming down. We managed to find a seat and a cup of tea at the ferry terminal and wait for the late arriving ferry.

Back on Jersey, where the rain had not arrived yet, dinner that evening was a rather dubious affair from a fast food outlet, and was adequate! Despite, the lateness of the ferry and the rain we had a lovely day and wish to spend a few days in Guernsey to really appreciate what the island has to offer.

The island has a very different feel to it then Jersey. It almost feels that while Jersey has played up and truly promoted it proud history and culture, Guernsey has not; it is as proud of its historical journey as Jersey, but has rather played it down, in almost a humble way and that adds to the appeal of the Islands.
Posted by Julie Goucher at 9:20 am