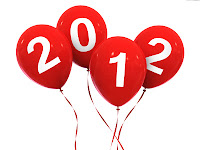 My dear blogging genefriend, Genaus has devised the last Genememe for 2012 - gosh what a mouthful!

So here goes! - Thanks to Genaus for the balloon graphic!


1. An elusive ancestor I found was - I don't know about elusive, but one that springs to mind is a link to my Ellis line from Geelong Victoria Australia. When I established that one of the family played for the Geelong Football Club.

2. A precious family photo I found was - Whilst visiting family in NSW, my Cousin produced 3 photograph albums that had belong to her mother. I didn't share any blood line with my Cousin's mother,(my line was through her father). What was wonderful was the photographs that had been kept. All those sent from my Aunts to Australia including one of my own wedding that I had not realised had crossed the pond. The precious action was that my Cousin let me borrow the photographs and I spent two hours one afternoon with another cousin scanning the photographs. Many of these were of the German/Prussian side of the family. A true treasure and discovery.

3. An ancestor's grave I found was - After 20 years I revisited the Ellis graves at Mount Duneed Cemetery in Geelong back in October.

4. An important vital record I found was - The answer to this is really a collection of photographs and a revisit to some graves in Victoria and re-reading an out of print book.

5. A newly found family member who shared - (not applicable!)

6. A geneasurprise I received was - Whilst I was in Australia I celebrated a birthday. My young cousin presented me with a fantastic present of a beautiful album which included photos of her children and one of all us together as we celebrated the birthdays of her Dad and myself.

7. My 2012 blog post that I was particularly proud of was - During 2012 I wrote several posts as contributions to the Jubilee Time Capsule.  One of those posts was about Kiva and the contribution the Families for Genealogists Team makes with a particular slant towards the Commonwealth (which was a requirement of the Time Capsule) You can read that post HERE and a slightly more generic one HERE

8. My 2012 blog post that received a large number of hits or comments was - Back in April I took part in the A-Z Challenge. I based my posts for the month on my love, ancestral and genealogical links to Australia. I loved it and judging by the comments and amounts of hits I received other people did too! You can read the posts HERE

9. A new piece of software I mastered was - nothing wonderful with bells and whistles! In fact is in very simple - Google Docs. Simply valuing them for being just so easy and versatile to use, especially in a travelling situation.

10. A social media tool I enjoyed using for genealogy was - Librarything. Now that is possibly a rather usual tool, but it engages me with other book minded people including Genealogists and enables me to catalogue my study - fiche, books and CDs.

11. A genealogy conference/seminar/webinar from which I learnt something new was - I took part in the online version of the Guild of One Name Studies Conference. I was able to watch the conference from the comfort of my study. This was an experiment from the Guild and one that was great to participate in.

12. I am proud of the presentation I gave at/to - Now, I am not naming names, but I was in the audience at a  meeting. The speaker was a no show and the committee were in a bit of a panic. I was approached and asked if I could get home and cobble together a quick presentation from anything that I had on file. Rather than go home, and in the past I have had to produce some off the cuff professional training events I agreed to pull something out of the bag. After and hour or so I had managed to deliver the presentation and take questions and emails addresses as some of those present wanted further details. Being a bit of a reflector I have decided to pull something together which will appear in the blogosphere in the New Year HERE

13. A journal/magazine article I had published was - My first post at the Graveyard Rabbit's On line Journal

14. I taught a friend how to - discover the wonder of researching her own ancestry and how to record her discoveries.

15. A genealogy book that taught me something new was - I was, whilst down under lent two books. Now I had seen and read both of these books previously,but that was 20 years ago! The books sadly out of print and focus on two branches of my Cousin's ancestry on his mother's side that migrated from Silesia in Prussia to South Australia and then gradually moved to NSW. It was as I said a second (and perhaps third) read and I again discovered something new.

16. A great repository/archive/library I visited was - The Mitchell Library in NSW.

17. A new genealogy/history book I enjoyed was - In a NSW newsagent I stumbled across a selection of Australian and New Zealand magazines all aimed at family history. They looked great and as I could not make a decision on what one to buy I bought them all! Shhh, it has to be a secret from him indoors!

18. It was exciting to finally meet Judy Webster, the lady behind the wonderful and inspiring Genealogists for Families Project. We spent a lovely afternoon together in Sydney.

19. A geneadventure I enjoyed was - A wonderful visit to the War Museum in Canberra with my Cousin and her daughter. Seeing the wonder on an 11 years face as she was told the story behind a name on the memorial. The name was of her Great Great Uncle. To steal a phrase from the London Olympics 2012 - "Inspiring a Generation"

20. Another positive I would like to share is - That from January 2013 I shall be writing a regular column and blog post for The In-Depth Genealogist & continuing writing for the Graveyard Rabbits On line Journal

Posted by Julie Goucher at 7:49 pm

Email ThisBlogThis!Share to TwitterShare to FacebookShare to Pinterest
Labels: 2012, genealogy