Beyond the Internet Week 10: Church records – the life and times of a parish and its parishioners

Poor Law records for one of my ancestral villages of Puttenham shows very clearly that the Budd girls were often pregnant and husband less! Did there parents shake their head and hold their head in their hands as they were informed of another mouth to feed and another absent father? Some things we shall never know, but is true now and I dare say then, if money, and especially other people's money has to be given to someone then there is probably a trail of paper to support the fact.

Within each parish was a wonderful item called the Parish Chest. Within the walls of the box was kept the documents of the parish and contained therein the hopeful details of our ancestors. This included the Poor Law Records which include Bastardy Bonds and Settlement Records.

Also contained within the box would be details of the Parish Clerks, those individuals who were of a certain standing within the village who would ensure that the "right thing" would be done by the parishioners. The Church Warden records and other miscellaneous records relating to the village.

In 1824, the Village boundaries of Puttenham were walked by various parishioners and this record has survived within the confines of the Poor Law records. The date the boundaries were walked was the 9th April 1824 and I can see that several of my Budd ancestors walked. Richard Budd along with others. They were joined at Pond Head by Richard Budd (Richard Budd's father) and George Budd.

The Curate of Puttenham was a curious and interesting chap, by the name of Charles Kerry. During the time he was Curate, Kerry recorded all sorts of details about the parish, its parishioners and various other historical details in a series of manuscripts. The manuscripts have survived and were returned to Kerry's home County of Derbyshire upon his death. Surrey Records Centre have a microfilmed copy of them and I am lucky enough to have photocopies of the manuscripts.

Here is an example of one of the gems, from within the manuscripts 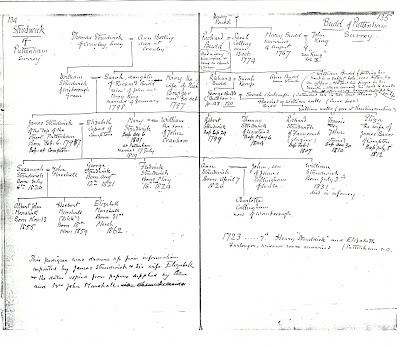 What is wonderful about this pedigree, written by Kerry is the incidental facts that it mentions. Facts that would otherwise be completely unknown to me and fellow researchers. William Budd is recorded as having been bitten by a snake when he put his hand into a rabbit hole. As a result of the bit, William became crippled. Kerry tells us that he attended Sarah Budd (nee Chalcraft) during her last illness and that Richard Budd, my direct ancestor had a fine tenor voice. I can confirm that sometime in the last couple of hundred years, the fine singing voice has been lost within the family! Who says the dead don't speak?

There might be diaries left by land owners, or jotting parishioners? Perhaps people that do not relate to your specific ancestry, but whose lives would have co existed with ancestors. Are your ancestors written within those pages?

There are so many places to explore within the parish archives, that perhaps go beyond the official records of the time. Did you ancestor pay a tithe? Did the land owner hold lands in nearby Parishes or Counties? Are there diaries, papers and manuscripts of people in those parishes? Have there been books written about your ancestral parish? If so, look through the bibliography as that might reveal a document or a source that has not been looked at.

What treasures exist in your ancestral parishes?
Posted by Julie Goucher at 6:22 pm

Email ThisBlogThis!Share to TwitterShare to FacebookShare to Pinterest
Labels: Beyond the Internet