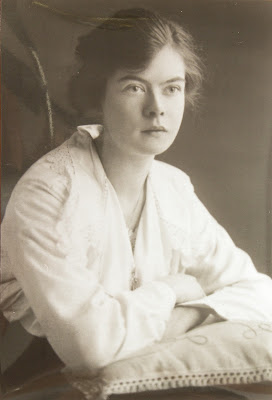 This pretty young woman is my Great Great Aunt, Emma Jane Harris, although she was born to her parents just before they married!

Emma Jane was born on the 1st November 1864 in Puttenham Surrey the daughter of Henry Harris and Caroline Ellis who were to marry on 3rd December 1864 and raise together a family of 10 children.

Emma married her cousin, William Arthur West in 1897. William was a soldier who had seen service in the Zulu Wars in which he had lost his first wife and young babe.
So I can imagine the emotions felt by both Emma and William as they married.

They were blessed with two children, a son, William James born in the military town of Aldershot in 1898 and Clara in 1901.

By the time of the First World War, William Arthur had left the services and had set up a newsagents business in Stony Stratford on the Buckinghamshire and Oxfordshire Borders. His son William James though, followed in his father's footsteps and joined the Army. I am sure that both his parents were proud of their son and the contribution he was to make. We know that prior to his departure to France he had his portrait taken and his mother treasured it. As it appears as a pendent in the following photograph. 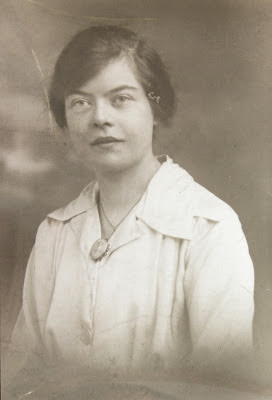 Sad to say that amongst that proud parental feeling was deep sadness, as their only son paid the ultimate sacrifice. This is such a sad photograph, and Emma has such a haunted look. I simply wish I could move into the photograph and give her such a hug, but alas that is not to be.

It seems completely correct that I end this post with a photograph of Emma's only son, who died, aged just 20 years, only two months before the end of the First World War. 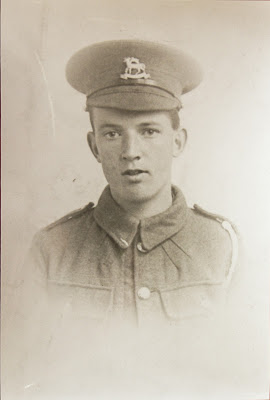 Carnival of Genealogy is hosted by Jasia at CreativeGene

Posted by Julie Goucher at 8:14 am