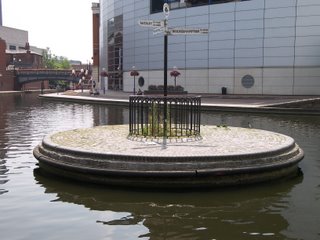 After an exhausting and very hot Saturday, those of us that stayed over met up in the hotel reception and went on a release walk. One via the Canal and one via the City centre. We opted for the canal walk, which was lovely and released lots of books. Pete, (Skyring) released one, well wrapped into the canal. I released one on to the roundabout situated along the canal.

After lunch at the Gourmet Burger Company we had a wander around the city, but it was so hot! In Victoria Square there was an open air concert & salsa dancing as part of the Latin America Festival, where Stuart could not be tempted to Salsa!

In the evening the last 8 of us headed off to Pizza Express for a delicious meal.

Pictures taken by Stuart & I of the entire weekend are HERE

And this has to be one of my favourite photos of the weekend. A photos of all the BookCrossing Live Journalers 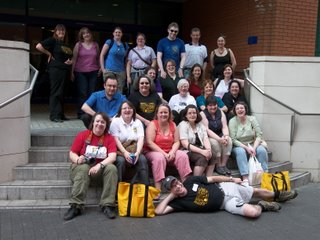