Back in July I headed up to Cardiff to spend the weekend with hubby who was away working as part of the Olympics. We awoke on a Saturday morning to glorious sunny weather and the forecast of temperatures in the mid 20s.

The place we decided to visit was St Fagin's National History Museum. St Fagins is a living museum located just outside of Cardiff. We had a fabulous day there, entry was free of charge and there is a small fee made for parking. It was a lovely day in terms of location, weather and company.

As I said, it is a living museum, and there are buildings, workshops and houses occupied and decorated in period costume, features and dress. Included in this is a shop and it is these photographs that I am using as part of my Weekend Cooking post. 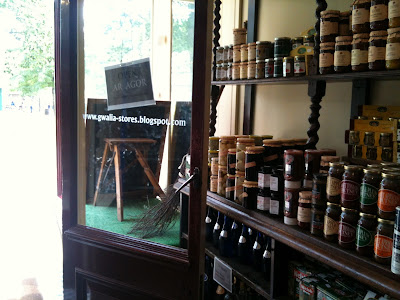 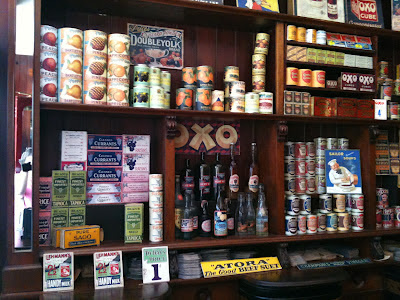 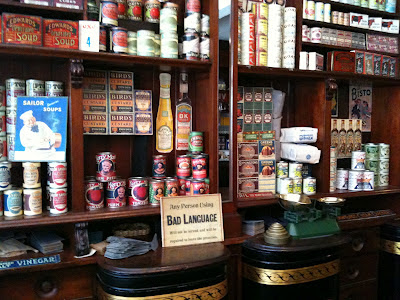 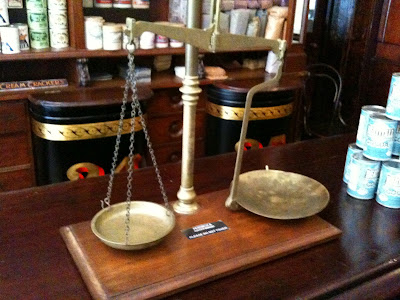 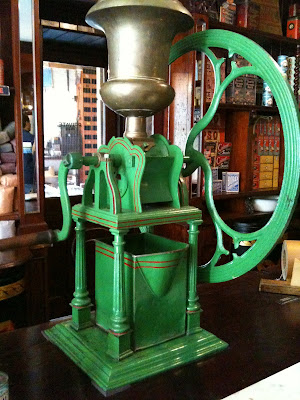 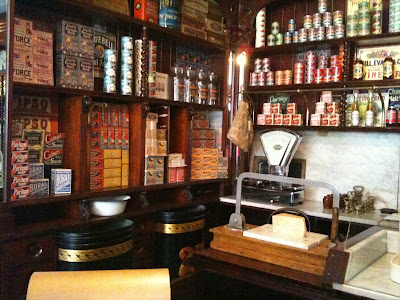 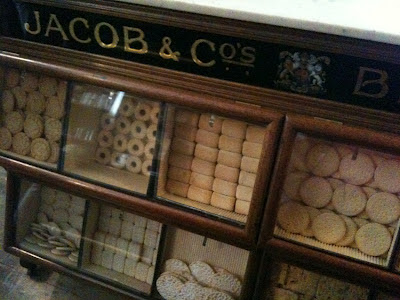 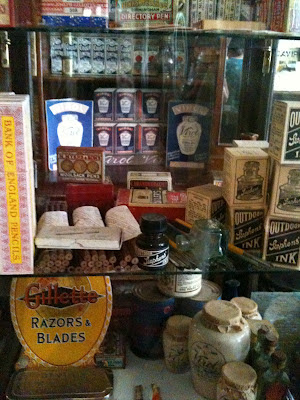 There was something incredibly fascinating in this old shop. Seeing the packaging of earlier times, things I remember my Grandmother keeping, and the old scales, not too dissimilar from those I used in my early pharmacy career days, when we did actually make ointments, rather that sending off for it to be made in a lab and the most we do now is slap a label on the pot!

My mind was cast back to stores from my Grandmother of visiting the grocery shop and being served. Provisions being weighed out, such as tea, before moving onto baker's shop, butcher's shop and purchasing food for a day or so. The days before fridges & freezers, supermarkets and home delivery.

Since my last ramblings post the Olympics have finished and the Paralympics started and finished. Didn't Team GB make us proud? Not though, just Team GB, all the Olympians represented their Countries with pride.

A friend of mine was one of the Volunteers based at the Olympic Park and commented to me several times, that on occasions he was simply overwhelmed with the whole thing, which he described while using his hands to gesture a very large circle. Amazing and unbelievable were just two words that he used to describe the events. Whilst I watched using the television you could feel the spirit of the event.

London have hosted the Olympics twice before  in 1908 and 1948. On both occasions the only way to view the events was to be there as television didn't exist. How remarkable is that? In the space of 64 years we have managed to technologically revolutionise the world.

We are in the last few weeks before our trip to Australia. It has been a long time coming and in the last 2 weeks have had to deal with a change of flight because of overbooking. As a result we get more time in Australia, which absolutely has to be a good thing! On the flip side it means that I have less time to be organised and plan, hence my quietness of late.

We have not made it obvious to Alfie yet that we are going away. Sadly we have a rather bright dog. He see's suitcases and there he makes the following assessment

Suitcases + master & mistress  = being left and no or few cuddles = big sulking!

He is not being left. We have a guest coming to stay who loves Alfie to bits and he will be thoroughly, thoroughly spoilt. Not to mention our good friends will give him lots of extra loves, cuddles and walks.

On the work front, it continues to be something that I do each day. I have lost my work get up and go and sadly that feel does not appear to be returning any time soon. In the meantime, my own work plans are coming together nicely and I am hoping that just into the New Year it will be good to go!

Regular readers will hopefully have noted that I have added a Kiva badge to my sidebar. If you didn't please have a look, and perhaps have a look at the new page that is being created - see the page bar at the top. Over the last year I have done lots of raving about Kiva and the Genealogists for Families Team. Such a well worth project.

Well, that is it. Thanks to the few regular readers who dropped me emails to ask where I was. The fact that I was missed, in the ether of the internet is something very lovely!
Posted by Julie Goucher at 3:21 pm 3 comments

Sirens of Paris by David Leroy 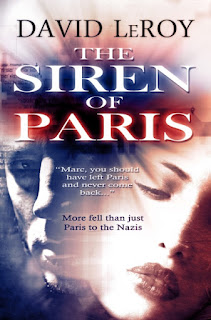 The story is set in War torn Paris during the Second World War. Marc is an American, who truly wants to be an artist, ventures to France and is soon caught up in the ex pat world.

These are dangerous times and all too soon Marc is swept away in a world at War whilst many of his country men have fled home.  Marc experiences love and working for the Resistance. He also experiences betrayal from the one person he believed he could trust.

The book is bought to life by the amount of  research undertaken by the author. There are some very descriptive pieces about historical events such as the sinking of HMS Lancastria.

The plot is gripping and in many ways thought provoking.
Posted by Julie Goucher at 5:51 pm 3 comments

When, over at Historical Tapestry we first discussed the concept of a series of posts about our favourite historical fictional writing centred in our home country I wondered and debated on whether to feature the United Kingdom or simply England. I could not decide and then set about simply jotting down some favourite titles and authors and it is those first notes that is the basis for this post.

First up is the Outlander series by Diana Gabaldon. The UK version of the first book was published as Cross Stitch. The series is fascinating and incorporates a variety of genres in addition to historical fiction. They span the the post war years in Scotland and then one of the central characters suddenly finds herself in the 18th Century Scotland and latterly America.

I started reading the series in about 2005 and was not sure it was my cup of tea, but I really enjoyed the first book and since then I have read the rest of the series and the secondary mini series which is about another of the central characters. The books are very well researched and whilst they include a degree of fantasy they are full of historical facts. I am now impatiently awaiting the publication of the latest book in the series, due to be published in January 2013. 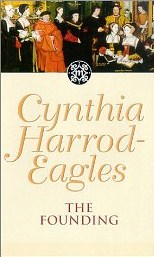 Another series is by the very well known author Cynthia Harrod Eagles. The Morland Series caught my eye about 10 years ago. Since then I have read the first two and because I am slightly obsessive I am striving to locate the complete series before I start to read them in order. I did read recently that the publisher was planning to cease publication beyond book number 34 which is a huge shame and I do hope that decision is not final. Sadly I could not locate the author's website, but did manage to find a full listing of the books in the series HERE. 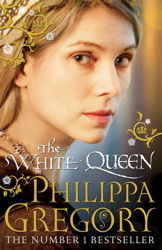 I recently was introduced to the fascinating series by Philippa Gregory as my local book group are currently reading The White Queen which is the first in the Cousin's War Series. Having been drawn in by this book, I explored the author's website and was delighted to see a whole list of further reading to explore, other books to read, chapters to download and even an iPhone app. I also note, somewhat excitedly that The White Queen is to be made into a BBC Drama, to be broadcast in the UK in 2013.

A book which I read a few years ago was The Suspicions of Mr Whicher. This was based upon a true event which happened in the Wiltshire in 1860. What I loved about this book was the fact that I could actually trace the events through historical documentation which appeals to my genealogical mind. The book was made into a mini series about a year ago and was broadcast here in the UK. You can read an extract and a bit more about the book HERE.

Currently in my rather large supply of library books I have a real door stop of a book - New York by Edward Rutherford. As I moved it this morning it reminded me that in this rather loose series based upon locations, the author has written three books set in England, the first is Sarum which is essentially set at Stonehenge and Salisbury.

The second is The Forest which is a spin off to Sarum and is set in the New Forest.

The third book is London. A fictional attempt to follow the history of the capital from early times to more current events, essentially 2,000 years of history.


I hope you would agree that these are some great books. I can think of a few more, but perhaps you would like to share your favourite historical fiction set within the United Kingdom.

The Results - Back to the Books Giveaway

Thanks to all that took part in this Giveaway Hop. This was my first one and I had 58 entries.

I asked hubby to call a number which would represent the winner.

Jill at Christmas Pie Crafts who was entry number 21.

Thanks to all those that took part.
Posted by Julie Goucher at 5:07 pm 0 comments

As I continue to cull the contents of my study and many bookshelves I thought I would take part in the Back to the Books Giveaway Hop, hosted by I Am A Reader, Not A Writer

The book I am offering is Toast, the story of a Boy's Hunger by Nigel Slater. Published in 2003. This copy is one especially published for the UK World Book Night in 2011 and is brand new.

THIS NOW CLOSED. Entries submitted after 7th September will not be counted. A post announcing the winner will be posted in due course.

Here you can see the other participants -