Book - The Piano Shop on the Left Bank by Thad Carhart 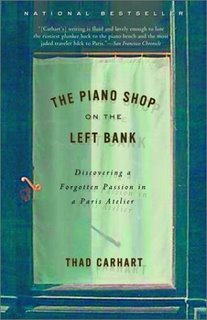 I start this one early last week and soon became caught up in the world of Luc and his wonderful piano shop. The book was written in a gentle way and I found that I really did enjoy it.

I guess the historian in me was interested in the facts and figures of how many pianos were made - 50,000 in 1850 and 500,000 in 1910, of which 350,000 were in the US. I did a quick search on Ancestry.com for piano maker and that showed that 471 people were recorded as piano makers in England in the 1881 census. There were no later figures, but only because I searched for an occupation rather than a known individual.

I was slightly disappointed that the author didn't try and find anything out about the name and serial number that was found on his piano, but again that is the historian in me and didn't spoil my enjoyment of the book.

I did enjoy this book. It is one of those books that will leave me pondering and thinking about it after I have finished it and sent it on its way.

Here are the Journal Entries
Posted by Julie Goucher at 10:07 am