The will of John Goucher, one of Stuart's great,great,great grandfather's arrived today.

There was something rather sad about it, he was obviously aware that he wasn't leaving anything to most of his Children and only three out of 8 were named, but he mentions that he prays that God will watch over them and help them. I wonder what or who determined which children inherited. John was born 1799, he wrote the will in 1867 and died in 1873. The will was proved in 1875. 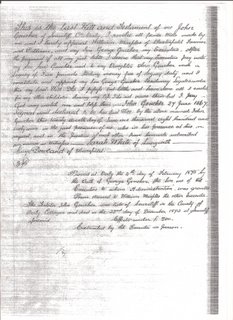 Posted by Julie Goucher at 3:44 pm