A glimpse from the Antiques Roadshow

I was catching up with my viewing of the BBC Antiques Roadshow from last week (14th November 2010) when a rather interesting item came upon the screen.

The item was described as a ham stand, and of slickware and contained a genealogical mystery. The photo is not terribly good, although I am rather impressed with the result from a iPhone via a pause replay of a TV program! 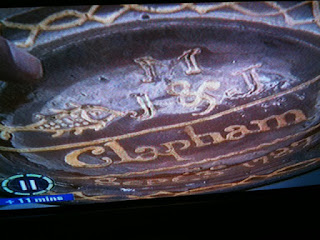 The details on the stand are as follows:

M representing the surname and both the bride and groom had the initial of J for their respective forenames. The fish symbol implies that the groom was either associated with the fishing industry or a keen fisherman. The name of Clapham refers to the location of the wedding and the date if September 3rd, 1787.

So who were J & J M and where is the Clapham refered to on the plate?

It does stand to reason that anyone who could afford a plate that would house a ham that size would come from a household of some income and thus could be an angler, rather than a fisherman living on a tiny income, but at this stage in the research I must not jump to any concluions.