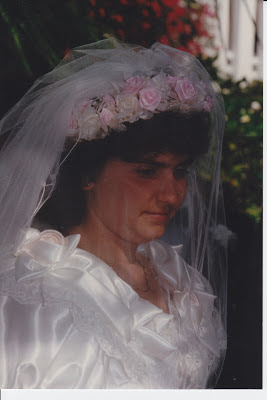 Today's photograph is of yours truly! This was me on my Wedding day in July 1994.

I became engaged in October 1993, I was swept off my feet! I can not recall when I originally went shopping for my wedding dress, I guess it was November or so. I do recall that I jumped on the train at Sutton where I was living at the time and headed home to Guildford to Pronuptia, which was a well known wedding dress shop.

This dress was actually the first I saw. There was a huge amount of dresses all hung up, but this one was hanging sideways, as if someone had moved it to admire from a distance.

It caught my eye and I tried it on. I then looked at a few others, but I knew that this one was the one.  I then progressed to veil and head piece and of course shoes.

You can just just make out the floral detail on the dress which I thought when I bought it was a peach colour. It was only when I took a friend to look at the dress that she said to me it was pink, so we had to have a hastily head dress colour change!

We approached the vicar of the parish in Guildford where I, my Mum and my Grandmother were all christened. Furthermore, my Grandfather's sisters had all married at the church. I was then surprised and fairly upset that the vicar refused to marry us, because I no longer lived in the parish. No amount of coaxing would change his mind.

My future in laws suggested marrying in Scotland, but that did not console me. Whilst it may seem fairly trivial to some, it was not to me and we looked at options. Meanwhile, we were looking at honeymoon destinations, but obviously could not progress further until we had a date and venue to have the ceremony!

The end result was we got married in Kenya. We had a lovely and magical 3 weeks there and in October we had our marriage blessed in the church where we were living. The vicar at Guildford even refused to grant us a blessing.

I kept the original dress that I had seen, I had a minor adjustment made to the length and then it was packed up in the sales box to make the journey to Kenya. The dress survived the journey and hubby did not look at the dress prior to the ceremony. I took with me my Grandmother's 22 caret wedding ring as my something old, my Mum lent me a hanky and a friend gave me a garter in the traditional blue.

We married under an arch made of traditional reeds and grasses in the grounds of the hotel. I watched the local women make the archway during the morning. Our wedding was at 4pm and as I walked up from our room I could hear the local choir singing in Swahili.

Now, almost 20 years later, as we approach downsizing, I am pondering what I should do. I still have my wedding dress, head piece and veil in the box that made the long journey. I still have the receipt and the boxes our wedding rings were in. Sad to say I may have to make a hard decision, but perhaps I will delay that one for a while longer!
Posted by Julie Goucher at 2:03 pm