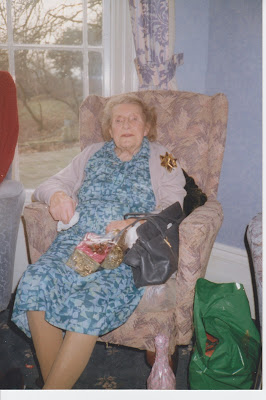 Today's photograph is of my Great Aunt Rose, who appeared earlier in the festival on day 13.

This is the last photograph I have of her, taken in 1993. Aunt at this point was still very very alert. Her body failed her with terrible arthritis and not brilliant eye sight. She had glasses, but that really wasn't much of a help to her.

Here she is sitting in her room and I often used to describer to her the flowers outside in the garden at her request. She loved flowers and loved even more getting into a wheelchair and being pushed round the garden. Even though her sight was poor she could tell the flowers very often by the smell. I have so limited knowledge of gardening that Aunt would say oh that smells like a...... and expect me to confirm or deny. My view was, she was 93 and as sharp as a knife and if she said it was whatever flower who was I to disagree.

Aunt passed away in August 1994, just weeks after I returned from getting married. I had not even had chance to tell of her of the trip and she had been so looking forward to hearing about it.

Posted by Julie Goucher at 4:08 pm