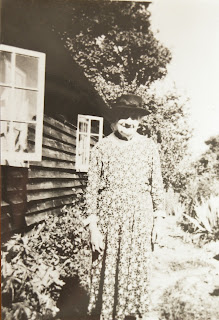 Today's picture is of my Great Grandmother, Annie Prudence Butcher nee Harris. This was taken in 1953 and was the photograph she used in her Christmas card for that year. It was obviously taken in the summer in her garden which she loved. Green fingers are a trait that runs in part of the family, sadly not as far as me though!

By this point Granny, as she was known was already a widow. Her husband, my Great Grandfather, Charles Butcher died in December 1943 and my Grandfather was given a month of compassionate leave from his army service in Sierra Leone to come home and pay his respects to his father.

As we research and collate the material we discover, I think we forget that all the basic emotions we feel were felt by previous generations. How must my Grandfather have felt, as he made his way from Africa back to England? A long way by modern standards, and even longer in 1943. The feeling of helplessness, and of course grief. Did he reflect on his last conversation with his father? Wonder how his mother was? She was not alone, as her other children remained in the area and her remaining 3 sons were working on the farm the family had farmed at since 1930.

In this photograph, Granny is in her early 70s and she was to live another 20 years, but more of that later in the month.
Posted by Julie Goucher at 10:29 am