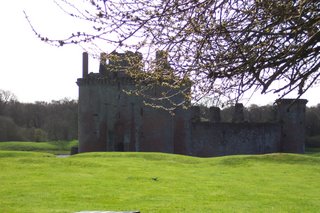 We were in a bookshop in Dumfries yesterday and Stuart spotted a lovely postcard of the castle. It said Dumfries & Galloway on the back, so we decided to locate the castle and visit. We took the A725 out of Dumfries and the road follows the River Nith. Just outside of Glencapel we pulled over and looked out at the lovely view. The river was calm, it was a beautiful day - sunny with a gentle spring breeze. The locals have started, what was described by the lady in the papershop as the Nith clear up, the removal of the rubbish from the banks of the River Nith. As we drove on, following the river, the river the widened, leading out to the Solway, and out eventually to sea. The road that lead to the castle turned inland. 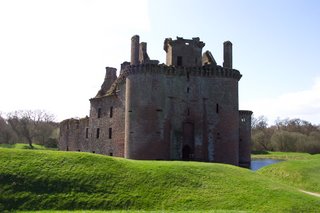 Following a nature trail will lead to the ruins of
an earlier castle, which was sited closer to the Solway and abandoned 50 years later, because it was too close to the river. The castle itself was lovely, they built their ruins well! Including some grafitti, dated from 1820! Swans occupy the moat, and even a few fish. 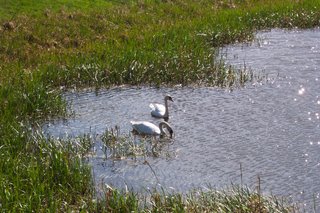 Posted by Julie Goucher at 4:45 pm