From the back cover - "Manchester 1976. The oldest living Victoria Cross holder and the last survivor of three friends who went to do their duty for Queen and country in the Boer War collapses at a remembrance Sunday service. A young newspaper reporter is assigned to cover the story and is treated to a unique first hand insight of life before and during the siege of Ladysmith in a long forgotten war, fought over three quarters of a century earlier. Natal 1899. Britain and her empire are at war with the Boer republics of the Transvaal and Orange Free State. Three old school friends, Privates Charlie Browell, Walter Shawcross and Frank Hoyland are involved in their first armed conflict which will leave one of them dead and another the proud recipient of Britain’s highest gallantry award, the Victoria Cross. As the twentieth century beckons, this last great imperial war will have far reaching consequences for many people including the three generations of the van Oppen family, riding on commando together in the service of the Transvaal Republic; Sarah Dyson, a volunteer nurse who finds love among death, disease and deprivation; Ada Dunkley, matriarch of a prominent Ladysmith family, left shattered by the tragedy of a murder of which and innocent man is accused and Joseph Ncube, a fifteen year old Zulu boy left disillusioned as his loyalty and courage are quickly forgotten after the siege is lifted."

Purchased a signed,advance copy from the author.

A page turning story about a young reporter sent to interview the last surviving British soldier of the Boer War. The reporter sits and listens as the old soldier relives the moments and events of 1899. The stench of illness & death, the friendships which were so treasured because they could be snatched away through the events of war, the way the black South Africans who were unrewarded for their involvement in the war were treated, and of the nurses who cared for the soldiers against all odds.

Entwined through the story are three generations of South Africans who are fighting the same war, but on opposite sides and of how one of the medals of the eldest generation of this family came to be back in Manchester with the surviving British soldier.

A really enjoyable book, well researched, and will there be a sequel?......Very thought provoking to someone who has an ancestor who fought in the Boer War. 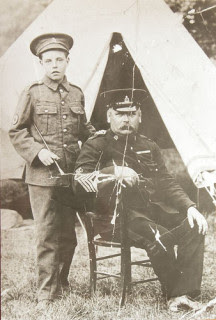 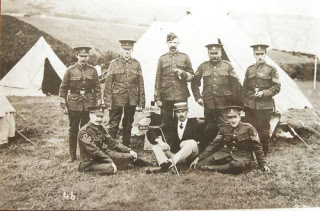 This photo is a group of Soldiers in the Royal Medical Corps during 1899-1902. My Ancestor, William Arthur West is in the back row, second from the right
Posted by Julie Goucher at 2:44 am