I often do my Christmas grocery shopping in the middle of the night, or at the very earliest just as the day turns midnight. Due to our domestics we planned to go to the supermarket just after midnight on Saturday 18th, which would have been my Grandmother's birthday (see yesterday's post).


Over the last three or four weeks we have had very cold weather, heavy frosts and the odd sprinkle of snow, so I was not overly surprised to find a heavy frost as we left the house at midnight on Saturday. We live half way on a hill in a cul-de-sac and the car was pointing the wrong way. Which meant that we had to drive down and turn. There is always a horrid bit in the middle of the turning area which has a tendancy to get very icy and Saturday morning was no exception. So there I was at midnight trying to push the car. Just when it seemed hopeless we managed it and set off. I spent the next hour or so pushing the trolley round gathering groceries. We made it home and I collapsed into bed at abou 2am, planning on sleeping until 7am when I needed to be up and away for work. Imagine my horror when I saw this at 7.00am 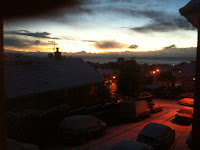 About 8am this was the real picture. 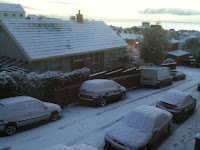 I went to leave and we tried to move the car and made it to the turning point, then..... Lots of wheel spins and Anglo Saxon. We managed with the help of a neighbour, some carpet under the wheels and sand to get the car back outside the house which is halfway up the hill. I have worked muscles that perhaps are new or have not been used in the last 20 years! Anyway, I didn't make it to work.
Monday faired no better. We had no more snow here, but we had dreadful icy conditions. Driving was not an option and actually neither was walking.
We did make it out today (21st Dec 2010) and this was the view across Haldon - lovely on a Christmas card, but lethal to drive and walk on. 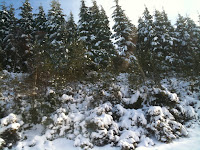 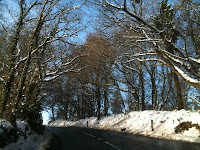