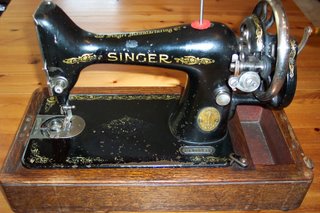 The machine displays a small plate with the serial number of F1985736. Research shows that this machine was one of 2,000 that was made at the Singer factory at Clydebank, Kilbowie, Glasgow during the period of July to December 1911. I am not too sure, but I believe this to be model number 99K. Out of interest by 1913, some 3 million Singer machines had been sold worldwide. The factory at Kilbowie opened in 1884 on a 46 acre site, emplying 7,000 people and finally closing its doors in 1980.

Obviously the machine and the lid does show 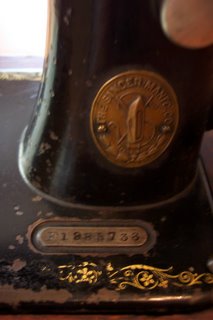 some signs of use, after all, it is 94 years old! Some of the gold guilding has disappeared, and I think that possibly there should be a cover to the area where the handle folds into, as there is a small lip at one end. The metal plate that would cover where the spool goes is missing. There is a small area, about an inch square on the side of the lid where the veneer has been lost. On the side there is a lovely decorate silver plate, I have the original key, some spools and two packets of needles.
Posted by Julie Goucher at 3:12 pm