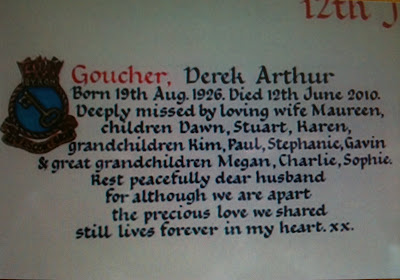 So, can you believe all you read? In this case definitely not!

The entry in the book (above) is actually incorrect. for issues that I won't go into, the names of the children from my father in law's first marriage are missing. There is also an addition of my sister in law who was adopted by my father in law and is the daughter of my mother in law from her first marriage.  The grandchildren are also incorrect, as a nephew is missing  because he is deceased, where as I would have added his name followed by (dec).

I can explain all the omissions and additions, but what of future generations? How would they know?

My husband registered the death of his father because my mother in law was in hospital at the time. Had she or my sister in laws registered the death there would again have been inaccuracies. The death was registered in Scotland and part of that process is to name previous spouses. My mother in law would have been furious and possibly argued the point and my sister in laws would not have known the details. The death certificate therefore, thanks to my obsession with family history contains the full and accurate details.
Posted by Julie Goucher at 3:37 pm