26th January 2012
The Australia Day post is once again coordinated by Twigs of Yore. For details on how to participate click HERE.
John Hunt Butcher was born in Hascombe in rural Surrey in 1781. In 1808 in London, he married Sarah Burchell and they raised a family of four children, one daughter Sarah born in 1805 died in 1810. I had never pursued this line specifically, as I descended from the brother of John's Grandfather, Daniel Butcher. The name of Butcher is fairly common in my bit of Surrey and the family lines complex with wills and property. At some point there is a falling out between Daniel and his brother Richard from whom John Hunt Butcher descends. I knew at some point I would come back to John and for a little more than 15 years I didn't focus on this line. That is until two things happened....
The first was I went search The National Archive catalogue on line for the name of John Butcher. Quite without thinking I typed John Hunt Butcher. I was just about to hit the delete button when I glanced at the screen and saw a reference to Australia. I am sure that everything stopped around me. It was one of those moments when I had to pinch yourself to be sure of what you were reading. All researchers know that feeling....don't you?
So I shelved the research for John Butcher and focused on this John Hunt Butcher. What I read, made my head spin. The Butcher family had always held property and land. There are numerous documents in the Surrey Records Centre for property being purchased jointly between Richard Butcher and my several times Great Grandfather Daniel Butcher. Sometimes they sold the property, sometimes they sold to each other. It all gets very complicated. Some of the names I was reading both in terms of names of individuals and names of property were known to me. This was definitely my family, although not my direct line of descent. The documents in question seem to provide details of property and money between various people who descended from the Butcher family. I made a note of the extra details, even from the catalogue it provided some extra data, but there is still a need for the original documents to be sighted and copies purchased. I sat and wrote a long list.
I then turned to the biggest statement and question, followed by another question and then another. John Hunt Butcher migrated to Australia, where, when, why. My brain thought it was going to explode, and my poor hand could not write fast enough. The documents directed me to Lowlands near Richmond Van Dieman's Land (Tasmania). A search of The State Library of Tasmania directed me to a painting of Lowlands by Mary Allport (Allport Collection). 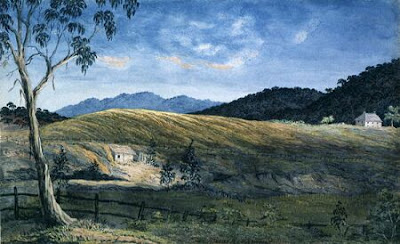 There was something very peaceful about the picture. It reminded me of early pictures that I had seen of the family home in Hascombe, called Park Hatch. How did he acquire the land?
The Colonial Secretary index revealed that the data had been transcribed as William Butcher, but does indicated that John Hunt Butcher was given 2,000 acres on 16th June 1824. Which probably explains where Lowlands was built; and it was probably built with a reminiscence of his home in Hascombe.
The second thing that happened, did so just before Christmas. I saw a posting on one of the Australian Rootsweb mailing lists. Did anyone descend from John Hunt Butcher? I emailed the enquirer. Whilst they did not descend from the line, there was an association between the researcher's family and wife of John Hunt Butcher, Sarah Burchell, who it would appear was the sister of William John Burchell, a well known Botanist. A further glance at the family tree reminded me that John Hunt's sister, Suskey had married a George Matthew Burchell who in turn was Sarah's brother. Was the Burchell's the reason for John Hunt applying for a land grant? It would appear that another brother of George Burchell's, Charles had applied for one in 1821, but had stopped in South Africa en route to see his brother William John and decided to stay there.
My research for this line is continuing and is very much a work in progress. I want to have a real understanding as to why John left England. What happened to his family once he was in Australia? From early research it appears that John himself was a Magistrate and at some point a branch of his family moves across to Western Australia. I am a long way, both in terms of understanding and research and in geographical terms. My quest is to get as much basic research done prior to my Australia trip later this year.
Posted by Julie Goucher at 1:57 pm