M is for...... .Maps
One of the things that is vital to researching is a map of the area. Way back in the early 1990s I spent about $8 on a large map of Australia, one that really shows a good level of detail. I came across it in the filing cabinet a few weeks ago when I started my Australian research quest in readiness for my trip later this year. Said map is currently secured to the wall in my study (easily removed with no damage!) 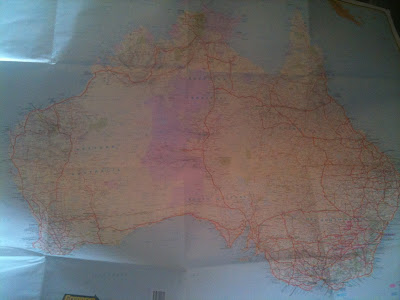 Not a brilliant photo. I was standing slightly precariously to take this! but it gives a sense of the detail on the map.
Compared to this postcard which I discovered as part of a large batch that I bought from a bookshop in Hay on Wye. All the post cards had been discovered in books by the seller! 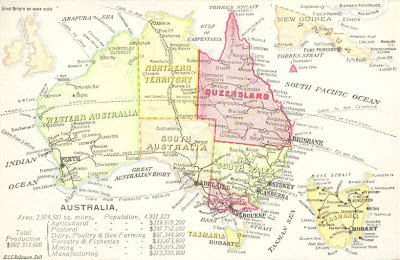 Whilst it does seem to be a bit off in terms of accuracy, I love the busyness of the card. I love the extra detail given to Tasmania, almost as though it was added as an after thought and the map of Great Britain at the top left. The card was published in 1916 and the map of Great Britain is reflective of this, as it shows Ireland as one Country rather than one divided!