Firstly, It was all my Cousin's fault. She mentioned pancakes when we were down in Victoria and since then I had been almost dreaming about them.

Then, as luck would have it, whilst we were in Sydney we stumbled across a restaurant in Darling Harbour called Pancakes on the Rocks, and well, it had to be done!

We went in and sat at a table and initially ordered drinks whilst we checked out the menu. The couple sitting next to us were just finishing their main course, chicken and mushroom pancakes. We were almost decided when their desert was presented at the table.

It was the loveliest creation of chocolate and strawberries and called Devils Delight. It looked delicious and we both ordered.

After waiting what seemed an age, our wonderful creation arrived and it was everything I thought it was going to be...and more. 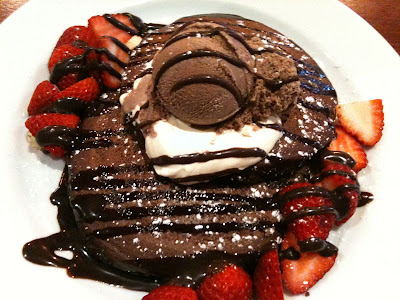 Taking part in the A-Z April Challenge
Posted by Julie Goucher at 11:09 am