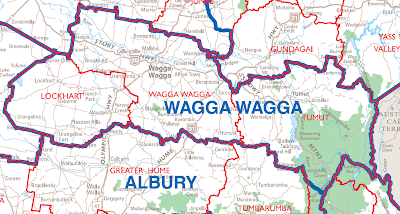 The name Wagga Wagga is an Aboriginal one, meaning place of many crows. Wagga, as it is known is a central and largest city in New South Wales. It has a population of around 50,000 and plays host to the Murrumbidgee River, which runs through the centre of the City.

I first came to the City in my early 20s and with each visit I feel more at home here. Ironically, it feels more like home that the actual small down in Devon where I live, and I guess there is a concept to the expression of "home is where the heart is"

The original inhabitants of the area were the Wiradjuri People, which were the largest Aborginal group in New South Wales.

Today, Wagga is a thriving City with a Botanical Garden, a regional airport and University. It is a multi cultural city and much, much more.

Taking part in the A-Z April Challenge
Posted by Julie Goucher at 10:20 am