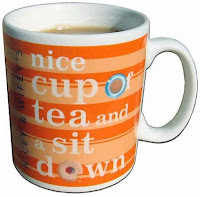 I thought that as I am going to be away for this edition of Tea Cup Tuesday I would comment on an earlier post from my blog, back in 2006.

For me, 44 pages into the book, I relived some happy memories. The book talks about storing buscuits, that accompany tea in an old biscuit tin. Old because it adds credibility.

I remembered the biscuit tin that my late Aunt had when I was a child. During a visit, I was offered a biscuit, which I declined, and asked if she still had the biscuit tin she had always had. Although showing a puzzled look, Aunt produced the said buscuit tin. It was the same one, and it has been in use for more than 30 years.

I don't actually know when I first starting drinking tea. My grandmother always had coffee and for 11 or thereabout and a cup of tea mid afternoon. Before she went to bed she always had hot chocolate. My mum doesn't drink tea, and rarely coffee, but does make an excellent cuppa! and I always drink tea, and rarely coffee, unless a generous Tia Maria is added to it! My tea preferences are probably verging on the boring side. I like Tetley's and am not fond of flavoured teas or Earl Grey. Although I did towards the end of last year receive a book box with some flavoured teas and I did remove and drink one that was a citrus flavour.

A few years ago I was on a course and  after dinner we were offered coffee or tea. I selected tea. About 10 minutes went past and the waitress arrived clutching a nice wooden box, the sort of box that hubby would store fishing flies in!, she opened it and revealed about 20 different flavoured teas. My colleagues, knowing that I like plain tea, of which I prefer Tetley's were looking in amusement at what I would select. Much to everyone's horror I said, "I'll have the nearest to Tetley's" to a rather bemused waitress.

I like my tea to have milk added, so it is a medium to dark brown with no sugar. I am not keen on powdered milk added to my tea, long life or UHT milk. Tea made in hotels using those little pots of milk never tastes quite right. 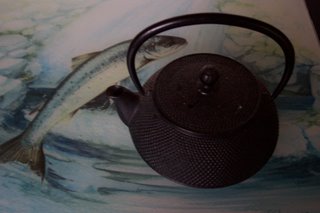 The section about tea pots is accurate. Why do they always leak? Actually hubbys says they don't and that I pour too fast. A few years ago we were in the Army & Navy store in Guildford. This has been rebranded as House of Fraser. We went up to the rather snazzy resturant on the 5th floor and I had a pot of tea. It arrived in a lovely solid metal tea pot that had an oriental feel to it. I asked if they were sold in the store and was told no. I was disappointed, but left it there. Then about 4 months later we spent a day in Honiton, having a wander through the antique shops, and there I spotted an identical tea pot. I bought it, and have used it only about twice, but I like it and its a nice addition to the kitchen and it doesn't leak when I pour.

The web site that accompanies this book is HERE 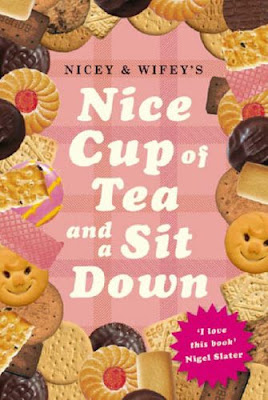 Submitted as part of Tea Cups Tuesday hosted by Artful Affirmations & Martha's Favourites
Posted by Julie Goucher at 9:26 am