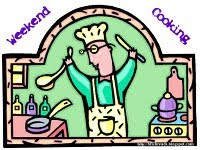 Back in March of this year I saw an interesting two part review of Mrs Beeton's Book of Household Management (Abridged version published by World Classics).

Here are the links to Review One and Review Two written by Bunny's Stuff.
I was interested in the review and as I had a voucher that I wanted to spend on books that would become part of my library collection I ordered it from Waterstones.

The book arrived and is really interesting and is currently resting on my cookbook shelf on the hall bookcase.

Last week there was a documentary broadcast on BBC 2 presented by Sophie Dahl about the life of Isabella Beeton. I recorded it, and finished watching it this morning. 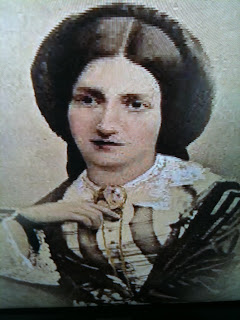 Isabella was one of 4 children. Her father died when she was young and her mother, like many women of the time remarried to a widower who also had 4 children. Isabella's mother and Step Father went on to raise a total of 21 children. From early sources Isabella was aged about 12 years old and was instrumental in helping look after her younger siblings.

She then married Samuel Beeton and I think became a women of future generation. In addition to being a wife and later mother she also worked within Samuel's publishing business. Isabella knew grief. She lost two of her four children and sadly passed away aged 28 years. 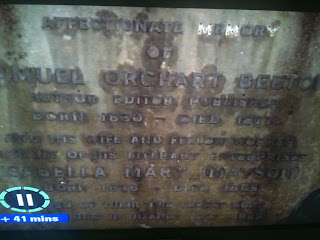 What is sad, is that her headstone, (photographed from a live pause on the TV) reveals that she was a "fellow worker" in her husband's publishing world. There is no mention of her journalism and achievements as an author. Which was very much a sign of the times of Victorian England.
The program made some of the dishes that Isabella produced in her book. This one was a favourite of mine from the program, although I have no plans to make it!

Here is the recipe from the book 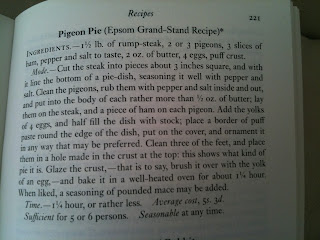 And here is the finished pie, suitably decorated! 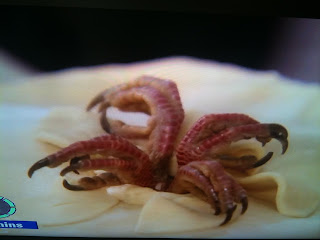 The program ended with a dinner party. The table decorated in full Victorian splendour. The dishes were those explored on the program and the guests were all the experts who had given advice and insight in the life and times of Isabella Beeton.
Posted by Julie Goucher at 12:19 pm