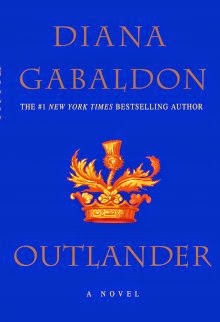 Several years ago I was introduced to the books set Scotland, called the Outlander Series by Diana Gabaldon. The series has progressed and is now on book eight; and each of the books is a whopper!

The initial book in the series (Cross Stitch in the UK) is set just after the second world war.  The following is an excerpt from the author's website

"In 1946, after WWII, a young Englishwoman named Claire Beauchamp Randall goes to the Scottish Highlands with her husband, Frank. She’s an ex-combat nurse, he’s been in the army as well, they’ve been separated for the last six years, and this is a second honeymoon; they’re getting re-acquainted with each other, thinking of starting a family. But one day Claire goes out walking by herself, and comes across a circle of standing stones—such circles are in fact common all over northern Britain. She walks through a cleft stone in the circle….and disappears.........."

As I started to read this book I wondered if my Grandparents had experienced something similar. They married in November 1939 and in 1940 my Grandfather joined the army. He was discharged from service in 1946 and remained on the reserves list until 1954. My Mum was not born until 1947, so it is probably fair to say that by the time Mum was born, her parents had actually lived together for about a few years.  How had they adjusted to each other? That is as far as the similarities ended, as my Grandparents never went to Scotland, and as to disappearing in standing stones, I can hear the voice of my Grandmother now saying "what poppycock!"

Now there is to be a television series which sadly, does not appear to be airing here in the UK soon, unless you know different! - If you do please leave a comment.

Yesterday I was working on an article for The In-Depth Genealogists when I spotted that the tartan's used for the series had been registered with the Tartan Register in Scotland. You can see the five tartans associated with the series HERE and to see the article on Tartans you need to subscribe to The In-Depth Genealogy blog or check using this link
Posted by Julie Goucher at 10:20 am