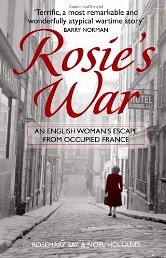 The sobering account of Rosemary Say, known as Pat who found herself in France at the outbreak of the Second World War.  The events are presented in a very matter of fact way, which has a genuine feel to it and as I read I wondered if I would have faired better given the situation? I suspect not.

Pat is a young girl in her early 20s who sets out to explore and meet others in a foreign country. That country is France and she is employed as an Au Pair to a family in Avignon.

Therefore as Europe heads into the turmoil of War, Pat finds herself in France, as the German troops invade. Pat is young, isolated and has very little money. She seeks assistance at the embassy in Paris only to find that the employees who could have helped have left and made their way back to England. She eventually finds some work within the cafe at the police station, but that is short lived and she is eventually interred in a camp.

The story continues to unravel the events that happened once in the camp, how Rosie copes with a loss of liberty and functional belongings such as a toothbrush. After a period of time, Rosie is determined to escape and with another internee she indeed does escape and makes her way, eventually across France into the region known as Free France, through to Spain and finally to home.

There was huge amounts of fear and uncertainty. Not just for Pat, but also for her family who had eventually managed to correspond with Pat through the help of the Red Cross. Once Pat is an escaped prisoner and effectively on the run in enemy territory, her parents are bewildered as to what had happened.

This was a remarkable story. Pieced together by archives and letters written and collated by Rosie's father, notes written by Rosie before she passed away and then by her son.
Posted by Julie Goucher at 5:04 pm