The last week or so has been a bit of a challenge. Just after I wrote my last Ramblings from my Desk post I went to upload our photos to Flickr and found that when my laptop felt overwhelmed it simply turned itself off. Hubby has the same laptop so I swapped the chargers over in case it was a charger issue. The laptop still turned itself off. I phoned PC World; I eventually got through to the technical team, explained the situation and asked for a telephone opinion. The recommendation was a replacement machine or we could perhaps replace the fan.

I decided on a new machine and we spent a goof 5 hours looking for a replacement laptop. My last machine, purchased new in 2008 was a Toshiba and has been a faithful friend and companion. Eventually I decided on a 2013 model Toshiba with Windows 8.

I am not quite at the familiar stage just yet. Despite having all my working documents saved in Dropbox, which is my usual method, I am running behind my personal schedule, which is why I have been blog quiet for the last week.

One of the machines I did look at was a Chromebook. Now I liked them, but as there was no disc drive I opted for a laptop, but before I make the next trip to Australia (or elsewhere for that matter) I am going to make a purchase.

The temperatures have cooled this week. Last Friday I had to go to a meeting in Exeter. I got back to Teignmouth about 2pm and nipped into the bank and then walked home. Boy did I look a sorry state as I made it in the front door. I was hot, sweaty and uncomfortable! By the end of Friday I had taken 3 showers and was forever grateful I am not on a water meter! 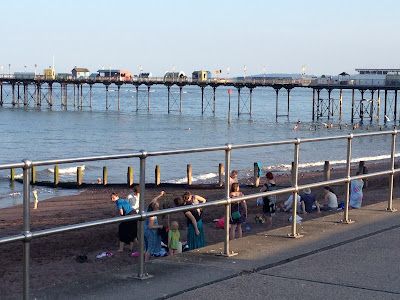 Having cooled down we ventured down to the sea front with Alfie for evening his walk. We had a lovely fish & chips supper sitting on a bench looking out to sea and then stopped off at the pub near the sea front for a glass of refreshment before walking home.

Poor old Alf was exhausted, his little paws slowing with each pace. Once inside he always races round the house before having a drop of water and a snooze. Whoever said, "it's a dogs life" was completely right! 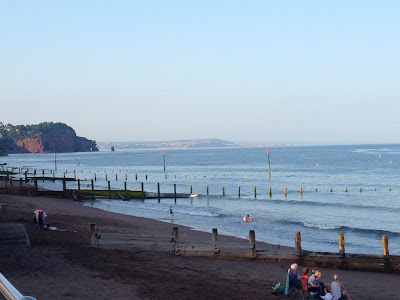 It is lovely to see the beach still a hive of activity into the evening. One family were having a BBQ on the beach, which is not that common here.

There are no dogs on the beach during May to September apart from the beach on the far left of this picture.