Last week I was reading at the 1940 US Census website what the plans are for this particular US Census. Previous Census are available for viewing via various genealogical sites. The difference with the 1940 Census is that it will be freely available to all from 2nd April 2012. On the back of that, a huge index project is being launched. This will enable researchers to locate their ancestors easier and enables those in the genealogical community, to be part of and embrace the genealogical community by give something back.
Those of us in the UK will not be so lucky. There was no Census in 1941 due to the Second World War. The 1940 Census in the United States, might, apart from any military service records, be the last documentary link between a Citizen of the United States and that individuals death. The United States joined the War after the bombing of Pearl Harbour in 1941, but American troops were all across Europe, assisting the forces of the United Kingdom and her Allies in the Liberation of Europe.
This may well be opportunity to locate family from Poland, Italy, Germany, France and alike, who fled their homeland and to a Country of safety and freedom. Some fled to the UK and will not appear in any Census until 1951, which is still a closed Census; some though fled to the United States and therefore the release and free access to this Census is a great genealogical asset.
Whilst, I am not in the United States, I, or at least my husband does, has relatives that will appear on the 1940 Census. I will benefit from the Census being made freely available, and my way of saying "thanks"! is to take part in the indexing.
For details of the index Project, or to become a 1940 Census Ambassador visit the 1940 Census website. 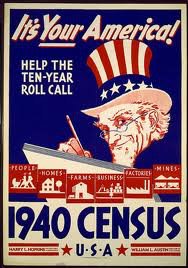 Posted by Julie Goucher at 4:34 pm