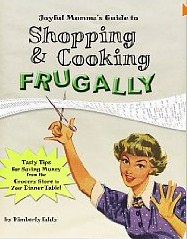 I spotted this a week or two ago, available as a free download for Amazon Kindle. I notice today though it has gone back up to £1.30 here in the UK. What drew me to the book was the cover. I know, you should not judge a book by its cover, but sometimes, you just have to! So downloaded the book was and I read using my iPad.

The author is an American, so this is written with an American readership in mind, although that did not matter. The book has some references to the author's Christianity, it was not overly referenced or intrusive. It is written in a very genuine manner and automatically readers share a warmth with the author.

What I found interesting was the apparent differences between grocery shopping in the United States and the UK. The every day things that we take for granted or acceptance within our own lives and way of life. The use of vouchers and really being organised enough to use them before the expiry, something that I rarely do! The author shares her experiences of food parcels - she had in the past both contributed to them for others and received one and her reflections and observations about the types of foods that go into them.

The food parcel references reminded me of when I was at school. Around October time we would have a Harvest Festive. Historically it was about giving thanks for the Harvest that would take families and communities through Winter into Spring. We were encouraged to submit the name & address of someone who was elderly or perhaps would benefit from such a parcel. We would then be tasked to collect a small box - usually a little larger than a shoe box and fill it with groceries. The goodies box then went into school for the assembly and afterwards we were dispatched into the community to deliver the said parcel to the named individual. Some happy memories there.

The author talks about buying fresh meat on sale, making the point of exactly how fresh is it? Taking advantage of those special offers. There were two thoughts that I had whilst reading.

The way we shop today is hugely different to the way our Grandparents shopped and further thinking was even shopping from when I was a kid in the 1970s is different to now. Here in the UK when I was growing up shops were closed on Sundays. The only times they opened on a Sunday was at Christmas. Shops closed at 5.30pm or 6pm and late night food shopping  - well until 8pm happened on a Thursday and Friday. Now grocery shops can be open 24 hours apart from the Sunday trading regulations which prevents this on a Sunday. In Scotland the trading regulations are different on a Sunday.

The domestic equipment we have now impacts on the way we shop. Homes have fridges and freezers,and there availability impacts on how, when and how often we shop. My regular supermarket has offers on fairly regularly. Some meats have little tickets on "2 for £10" these are foods that I regularly buy - mince, chickens and chicken portions, chops, gammon steaks. I tend to select those with the longest shelf dates and put in the fridge, then as the date approaches if I have not used it put it in the freezer. I tend to repackage chicken portions into bags of 2. Not only does that save space but also means I can defrost the two I need rather than the whole pack! Simple things that perhaps are frugal, but also have an historical concept to them.

At the rear of the book are some useful websites, including a link to the author's and some recipes.

I enjoyed this book, not because it has a nice cover! or the content, which despite being in the UK contained useful information, but also because it made me think, reflect of earlier times in my life and consider the changes to past generations.

Posted by Julie Goucher at 7:50 am