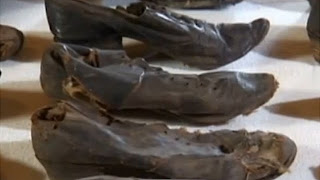 I have been catching up on my reading and came across an interesting article on the BBC website - Concealed Shoes: Australian Settlers and an old superstition.

In order to ward off evil spirits, shoes were placed within the confines of the property. One point raised by the article is that there was four themes connecting the items recovered. They were England, fear, youth and ignorance.
Further reading into the Concealed Garments Project is available HERE. The project was set up in 1998.

What is interesting is that these are the customs and superstitions that our ancestors lived under. It helps us build a further dimension to the social and domestic lives of our ancestors.
Posted by Julie Goucher at 5:47 pm