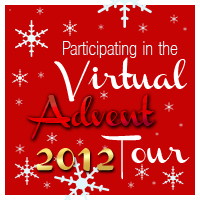 This is the second post for the 2012 Advent Tour I have written.

I did the same last year, and you may recall that my husband, who has his birthday today had a special one last year, you know, the sort that end with a zero! - Well the shock of all that is over and he has toddled off to work and then is out this evening for his work Christmas meal and we are celebrating tomorrow.

Unless you have been living under a rock you can not have failed to have heard stories of prediction that the world was going to end today. We have passed the "magical hour" and I can confirm that those of us in the Northern Hemisphere are still here as are those in the Southern - I received several posts via Face Book earlier confirming it!

In the Northern Hemisphere, the 21st December is the shortest day of the year. From today, day light remains for a little longer as we trundle through the rest of Winter into Spring and then finally, hopefully Summer!

The BBC reported that more than 5,000 people arrived at Stonehenge to mark the occasion of the Winter Solstice. A quick peek on YouTube revealed the following video

Wherever you are, Happy Winter Solstice and its just days away from Christmas! And also a very special Happy Birthday to my beloved!
Posted by Julie Goucher at 4:18 pm