Week #5 – Favourite Food
What was your favourite food from childhood? If it was home made, who made it? What was in the dish and why was it your favourite? What is your favourite dish now?
Week 5: This challenge runs from Saturday, January 29, 2011 through Friday, February 4, 2011.
My Grandmother, Lilian Edith Butcher nee Matthews was a good cook. Not fancy food, simply, nutritious meals that involved, not too much fuss. My grandfather had always been, because of work an early riser and like many of my Grandparents generation they ate their main meal at about noon and called this dinner. When my Grandfather worked at Unigate Diaries he would take a lunch box for his morning break and then cycle home for his main meal at lunchtime. At tea time there was bread and butter or sandwiches and cake. After my Grandfather retired and then later passed away this remained the same and it was only when I started working that lunch was simply a sandwich or alike and dinner was in the evening. Having said that, perhaps this is a geographical issue? Stuart from the North of England calls lunch dinner and his evening meal tea, and even now we sometimes have to have some clarity on what meal is being referred to!
Here are a few recipes that I can with my Mum's help remember my Grandmother cooking.
Rasher Pudding 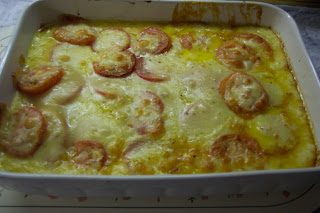 I remember the smell of baking potatoes in the oven for a tea on Saturday night. I would sit and watch my Grandmother grate piles of mature cheddar to be added to the potato. The smell of the potato was lovely and even now there is nothing like a jacket potato cooked in the oven. That was probably my favourite food as a child and remains so into adulthood.
On Saturday's if we had my Great Aunts visiting we would have sandwiches and cakes. Some dainty little bread rolls from a bakery in Guildford. Cake would be usually from Marks and Spencers. By coincidence I was in the food hall of M & S today and had a look a the cake counter. None of the sponges that I recall from childhood were there, which is a great shame. Shopping for food in M & S was considered a treat and reserved for the weekends and holidays. I wonder what my Grandmother would have made of my buying some basic groceries from there today, which I do say is not the usual for me!