Not quite an obituary for the Geneabloggers Sunday's Obituary theme, but I thought I would share something that I spotted while catching up on my newspaper reading. 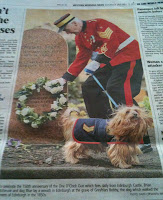 This is a newspaper article from the Western Morning News which is the regional newspaper for Devon & Cornwall England for Saturday 15 January 2011.
The caption which hasn't really come out that well in the photo reads:
"To celebrate the 150th Anniversary of the One O' Clock Gun which fires daily from Edinburgh Castle. Here Brian McKenzie and dog Blue lay a wreath in Edinburgh at the grave of Greyfriars Bobby, the dog which walked the streets of Edinburgh in the 1850s."
Posted by Julie Goucher at 12:43 pm