Nuncio and The Gypsy Girl by Kristin Alexandre, illustrated by Tom Loepp 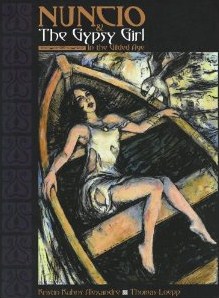 I really didn't know what to expect  of this book when I was approached by the author's publicist for a review. Graphic fiction is not something that I have especially read in the past, but nonetheless, I accepted the offer to review the book.

Set in the United States in 1912 we explore the life of a young gypsy girl called Neci, who falls in love with a man, older than herself called Ezra. Meanwhile, despite being besotted with Neci, Ezra's head is turned when he meets another women, who is well connected.

The two women confront each other and at once the well connected women realises that she has some serious competition for the affections of Ezra. Neci is then offered the chance to sail across the Atlantic, not realising the risks to the ship she is boarding, which was sunk with a great loss of life during the First World War.

The book concludes, with the tragic episode of the bombing and subsequent sinking of the Lusitania and we must await the next book in the series to find out the fate of Neci and Ezra.

The illustrations throughout are brilliant and are produced by the very talented Tom Loepp. I did enjoy the book. It took a bit of getting use to as the story is narrated through Nuncio, a grey African parrot, which made the story turn into fantasy. I especially liked the historical aspects of the story and these have been researched well.

Disclaimer - I was provided with a free copy of the e-book, in exchange for an honest review. The review and my thoughts expressed here are my own.
Posted by Julie Goucher at 9:19 am