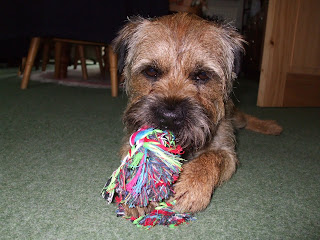 Alfie is our Border Terrier. A cute and very special boy.
Alfie came to live with us in the Summer of 2009 aged 2. He was a rescue dog who had been living in a household with a few boisterous children. I guess after 2 years he was fed up of being the toy of their household and he was returned to the breeder.
When we arrived at the breeders he was in the garden, in a dark passage to the side of the property in a cage on his own. Initially, he was wary of us, and who can blame him? He came home with us and we set about settling him in to his new home.
The picture above was taken on day two, as he plays with a new toy, we think the first toy he ever had. It is heartbreaking isn't it? Within 8 weeks he was treating the house like his own and now, nearly 2 years on it is his home and we simply live here! 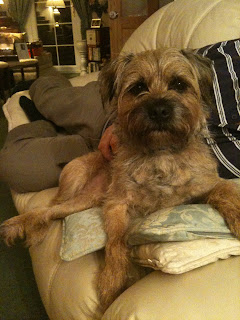 The photograph right was taken at the end of January this year. As you can see, Alfie likes the settee and cuddles!