I guess there had to be a post about the Royal Family in the A-Z blog challenge. For the last few months there has been much speculation on the Royal Wedding and this last week the newspapers, radio and television were full of it.

When we purchased our house, a late Victorian villa, sounds grand, and called a villa because it is on three stories! I was keen to put back into the house some of the Victoriana of yesteryear. I spotted in an antique shop a lovely plate of Queen Victoria, made for her Jubilee in 1887. The plate now resides above the archway in our lounge. The plate was swifty followed by other bits and pieces of Royal memorabilia that complimented the collection. 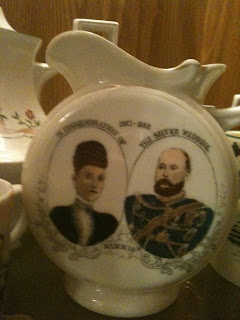